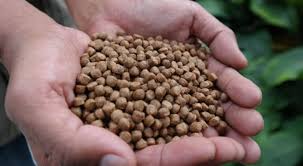 One age, one site- Poultry Biosecurity

Feed management strategies can be developed which can optimize the weight gain of catfish or minimize cost per unit of catfish weight. Each catfish producer can determine which goal is most important when offering feed to pond raised catfish. However, most producers chose the goal of minimizing cost per unit of catfish weight gain. Achieving this goal is more difficult than buying the least costly feed. Careful consideration of feed cost versus quality must be combined with good feeding practices in order to get the most from a dollar spent for feed.

Producers should consider that the catfish require different feeds at each stage of growth. It is best to feed a 38% protein feed in a crumble form to the smallest fingerlings. Catfish that are about 3 inches long can utilize a 3/16 inch floating pellet of 35-36% protein content. Once catfish fingerlings are stocked into food-fish production ponds, the options for feed quality are more numerous. One of the recent options is whether to feed a lower protein feed of about 28% protein or the more customary 32% protein feed. Research with pond raised catfish reports that until the protein content is reduced to 24% the catfish production is comparable to when 32% protein feed is used.

READ ALSO: 7 sure ways to make money in farming

Feeding times effect the weight gain of catfish but weight gain is usually not as important as labor and logistics on large catfish farms. For example, it has been reported that feed offered at two times each day will produce more weight gain than a single daily feeding. However, it has also been reported that offering feed when pond water dissolved oxygen concentrations are low is not advisable. So, feeding twice a day or morning and evening is difficult most of the year when dissolved oxygen levels are low in the morning. Aeration can be applied to boost the dissolved oxygen but at the added expense of the cost of electricity to run the aerator. For most producers, catfish in the fingerling stages are fed twice daily but catfish in food fish stages are only fed once daily.

Disturbance can have significant effect on feeding behavior and result in weight gain losses. Some sources of disturbance include excessive aeration, significant changes in the pond water level, seining, activity of fish eating birds, sudden drop in dissolved oxygen, sudden decrease or increase in water temperature, changing feed type, and changing feeding time. This list is a long one because feeding catfish is a complex task. Satiation feeding is the traditional method of providing feed because it assumes that the catfish are regulating their intake in response to any disturbance that might have occurred. Utilizing feeding schedules or computer generated feed allotments is a noble endeavor, but must be combined with daily observations and judgment at the pond bank based on catfish feeding behavior.

Restricted feeding methods can be utilized that maximize feed utilization by catfish. However, the type of feeding restriction must be carefully evaluated and compensatory gain must be allowed by ultimately feeding the catfish to satiation after a period of feed restriction. If the quantity of feed is lowered below satiation for the growing season, the catfish will not gain as much weight and an opportunity cost will be lost. If the catfish are restricted for a short period because of water temperature change or disease, the weight will be recovered if the catfish are fed to satiation afterward.

Nutrient concentration in commercial catfish feeds is being reevaluated. It is important that catfish have a complete diet when they are stocked at the high densities characteristic of commercial pond culture. Past recommendations for adding up to 13 vitamins to catfish feed may change. Under research conditions, certain vitamins can be left out of the catfish diet without causing any loss in weight gain. However, restricted feeding due to planned restrictions or unplanned restrictions caused by water temperature extremes or disease may require a more nutrient dense feed. The pressure to formulate

3 MAJOR WAYS TO MAINTAIN A HEALTHY CHICKEN THROUGHOUT THE REARING...