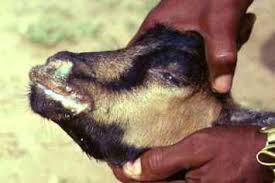 The disease and its impact
Peste des Petits Ruminants (PPR), also known as sheep and goat plague, is a highly contagious animal disease affecting domestic and wild small ruminants. It is caused by a virus belonging to the genus Morbillivirus, family Paramixoviridae. Once newly introduced, the virus can infect up to 90 percent of an animal heard, and the disease kills anywhere up to 70 percent of infected animals. The PPR virus does not infect humans.

PPR was first described in 1942 in Côte d’Ivoire, West Africa. Since then the disease has spread to large regions in Africa, the Middle East, Asia and Europe. Today, more than 70 countries are affected or at high risk and many more are without an official PPR status. PPR infected and at risk countries are home to approximately 1.7 billion heads – around 80 percent – of the global population of sheep and goats.

PPR causes annual economic losses of up to USD 2.1 billion. Looking beyond this figure, 300 million families are at risk of losing their livelihoods, food security, and employment opportunities. Moreover, small ruminants and their products are internationally traded commodities, particularly in Africa and the Middle East. PPR considerably affects export earnings and creates supply shortages. The inability of families, communities, and institutions to anticipate, absorb, or recover from PPR can compromise national and regional development efforts, and turn back the clock on decades of progress.

A PPR outbreak is an emergency due to its rapid spread and high animal mortality rate. Fatal diseases of small ruminants, such as PPR, affect the already vulnerable livelihoods and can decimate the savings of poor populations, in particular in pastoral areas. People become desperate when they lose their assets. PPR outbreaks, and the desperation due to the loss, can therefore trigger turmoil, migration, and volatile security situations. Eradicating PPR will increase sustainability, alleviate poverty, improve the resilience of poor pastoralists and their communities, enable them to better cope with other shocks and threats, prevent forced migration and mitigate extremist trends.

As an example, Mongolia reported its first-ever PPR outbreaks in sheep and goat populations in September 2016. In the absence of an adequate response by local veterinary services, the disease rapidly spread, devastating rural livelihoods, and disrupting exports and value chains. In December 2016, PPR spilled over to wild antelope species killing up to 60% of the Saiga antelope population, a critically endangered species according to International Union for Conservation of Nature (IUCN).

The importance of small ruminants
Small ruminants – totaling 2.1 billion heads worldwide according to FAOSTAT – are the primary livestock resource of many poor rural families around the globe, including subsistence farmers and landless villagers as well as pastoralists. For these households, sheep and goats are a source of food and regular income, a means to capitalize savings, and a safety net during times of hardship. Selling animals or their products provides the necessary resources to access food, as well as educational and social services. Food products derived from sheep and goats are an essential part of the diet for many people around the world and contribute to overcoming malnutrition. Sheep and goat milk and meat are of high nutritional value and provide high-quality protein, vitamins and minerals critical for cognitive development and physical strength, particularly for children. Small ruminants are reared within a variety of production systems, adding value to land, labor and assets: they produce milk, meat, wool, fiber and skins; they support the livelihoods of traders, processor, wholesalers and retailers involved in the value chain. The trade of live animals, sheep and goat meat and goat milk stretches from local to national, regional and international markets.

Small ruminants are well adapted to arid and semi-arid environments, and are kept in a variety of production systems throughout the world. These include pastoral areas, where goats and sheep make a mixed flock. Households may totally depend on the animals for survival, as crop production is almost absent in such arid or desert areas. In particular, in the dry zone in the Sahel region, it is the only way of life.

Previous articleMoulting in Poultry
Next articleMethods of Identifying Farm Animals