Importance of Creep Feeding to Piglet 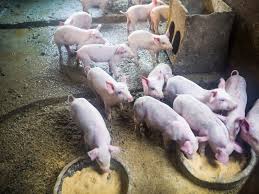 Importance of Creep Feeding to Piglet

Creep feeding is the practice of feeding a solid diet to piglets while they are suckling the sow, preparing their digestive system for weaning. Creep feeding initiates and promotes gut and digestive enzyme development, which enables the piglet to digest nutrients from food sources other than that of milk. This encourages feed intake, which is one of the greatest challenges to post-weaning performance.

Creep feeding becomes increasingly important and beneficial as weaning age increases. As piglets grow, their demand for nutrients similarly grows and with increasing age this demand outstrips the capacity of the sow to supply them, as the sow’s milk yield peaks at around three weeks and then slowly declines.

Basics of Good Creep Feeding
Keep creep feed fresh and clean and out of reach of the sow
Start creep feeding at seven to 10 days of age, or according to the manufacturer’s recommendations
Begin by offering creep on a flat surface, for example, a shallow tray (heavy metal or plastic trays that can hook into the slats)
Place trays close to the piglets but not under direct heat as this will turn the feed stale too quickly; also, keep feed away from the dunging area
Begin with very small amounts replaced at least twice a day, preferably more. Always remove all uneaten creep; only unmedicated waste creep can be fed to the sow
Offer creep when the sows are feeding as piglets are active and unlikely to be suckled for some time
Do not overfeed – feed to appetite. Litters often eat little and then suddenly begin to eat increasing amounts
Introduce small troughs or top up the trays more often if litters are eating well
Clean any fouled trays or troughs
Store creep feed in a cool place and always close bags to prevent feed taking up the farrowing house odours and/or becoming rancid
Be committed: creep feeding is more successful the more time and effort is devoted to it
Remember the importance of the sow: it is crucial to maximise milk yield, she will be providing the majority of the piglet’s nutrition.

Utilisation of creep feed should always be considered as a supplement for increased benefit rather than a replacement for milk.
Importance of Creep Feeding
Proper creep feeding is a very valuable and worthwhile process but it must be done correctly to see the benefits and avoid wastage
Creep feed gets the piglet used to eating solid feed and makes the piglet familiar with what becomes the sole diet at weaning; studies have also shown that as creep feed intakes rise, post-weaning diarrhoea is reduced
Supplementing sow milk with creep feed can result in both improved pre- and post-weaning performance.
Figure 1 illustrates the benefit of creep feeding over relying solely on sow milk
On average, you should expect a total creep feed intake of 400-600g per piglet when weaning at 26 to 28 days of age, although all units are different. Piglets weaned at 21 days will eat substantially less and those weaned later substantially more
Whether you are achieving this intake or not (400 to 600g per piglet) make a note of current creep consumption and target an extra 100g per piglet from what you are currently achieving
Aim for a litter weaning weight of at least 90kg. Figure 1. Piglet growth on sow milk only and sow milk plus creep feed
Encouraging Creep Intake
To make the transition as smooth as possible use the same creep pre and immediately post-weaning
Offer good quality, palatable and highly digestible feed which piglets will find appealing
Ensure that there is an accessible supply of fresh water as this will influence feed intake
Sticky meal that sticks to the piglets’ snouts and requires them to lick it may encourage intake
Pellets and blends of pellets with mash (meal and water) are also very effective, and generally result in less wastage than meal
Position creep feed away from corners, drinkers and heat lamps to minimise the likelihood of fouling
If using mats, they should be removed after a few days; creep should then be provided in feeders, which will need careful adjustment
In each litter some piglets will be eating nothing at all, even when the other piglets are eating well; watch out for these pigs and manage them carefully to prevent them fading.

Increasing weaning weight and daily feed intake post-weaning as a result of good creep feeding results in increased daily gain and improved food conversion ratio post-weaning. Lifetime benefit in growing pig performance can be expected, resulting in a net margin benefit of around £1 to £2 per pig sold or pigs being sold three to four days earlier.

Previous articleDanger of Overfeeding in Fish
Next articleHernias in Growing Pigs