Danger of Vitamin Deficiency in Chicken 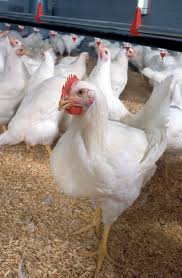 Danger of Vitamin Deficiency in Chicken

Complete feeds can be purchased that are formulated to meet all the nutritional requirements (energy, protein, and amino acids, fat, vitamins, macro- and micro-minerals, etc.) of a particular class of poultry.

Fat-soluble vitamins
Vitamin A is required for the health of the membranes of the digestive, urinary, reproductive and respiratory systems. A vitamin A deficiency can result when the level in the diet is inadequate or the vitamin added to the diet is oxidized by rancid fat in the diet. Additionally, neomycin, a common antibiotic, decreases the absorption of vitamin A. Vitamin A is a fat-soluble vitamin and an inadequate level of fat in the diet could also limit its absorption, even if in the diet at adequate levels.

Symptoms of a vitamin A deficiency include:

Vitamin D deficiency in poultry results in an inadequate level of vitamin D3 in the diet. Vitamin D3 is needed for proper calcium and phosphorus metabolism and thus the formation of a normal skeleton, beak and claws, and eggshells. Rickets occurs in young birds while cage layer fatigue (osteomalacia) occurs in mature females. It can be mistaken for other causes of deforming leg weakness in poultry.

Vitamin E deficiency results in a condition known as ‘crazy chick disease’ or encephalomalacia (softening of the brain). In chicks, it usually occurs between 15-30 days of age. Vitamin E is required for reproduction as well as the normal integrity of the central nervous and muscular systems. Vitamin E is also an effective antioxidant and is an important protector of essential fatty acids (e.g. linolenic acid), vitamin A, and vitamin D3.

Vitamin E deficiency is typically caused by an inadequate level of vitamin E in the diet. In addition, vitamin E is readily destroyed by heat (a term referred to as heat-labile). A deficiency of selenium will also result in a deficiency of vitamin E. Selenium levels are low in some areas of the country resulting in lower levels in cereal grains.

Symptoms of a vitamin E deficiency include:

Vitamin K is required for the production of prothrombin which is essential in blood clotting. So a deficiency of vitamin K results in an increase in hemorrhaging. It can cause increased embryonic mortality, with the dead embryos having hemorrhaging conditions.

Vitamin K deficiency can be caused by a deficiency of vitamin K in the diet. High levels of sulfaquinoxaline, a medication for prevention or treating coccidiosis in chickens and turkeys.

Water-soluble vitamins
Vitamin B1 deficiencies result from an inadequate level in the diet. Other causes of a deficiency include excess Amprol (used to treat or control coccidiosis) in the diet; moldy feed; or by rancid fat oxidation. A deficiency typically takes three weeks to develop. Vitamin B1 is needed for the formation of a coenzyme involved in the function of the nervous system. Vitamin B1 deficiency resembles Avian Encephalomacia (AE), vitamin E deficiency and Newcastle disease.

Symptoms of a vitamin B1 deficiency in young birds include:

Symptoms of a vitamin B1 deficiency in adults include:

Vitamin B2 is a cofactor in many enzyme systems. Most are associated in oxidation-reduction reactions that are involved in respiration. A vitamin B2 deficiency can be mistaken for Marek’s disease since both have enlarged peripheral nerves.

Symptoms of a vitamin B2 deficiency include:

For more update click here to join our WhatsApp group