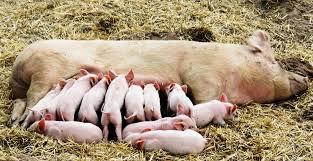 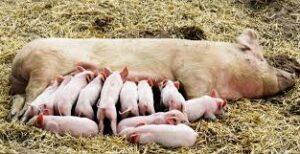 The ultimate aim of pig breeders is to have large, healthy litters, but what can be done to maximise the number of healthy piglets born?

It’s important to recognise that litter size can be affected by a whole range of factors, including breed, genetics, nutrition, timing of mating and conditions, stress, and disease. Consider each of these factors when breeding and you will provide your herd a better chance of achieving and maintaining profitable pregnancies.

Choosing a breed
The choice of breed can have a bearing on the potential size of litters, as some pigs have been selectively bred to produce bigger numbers. Modern or ‘improved’ breeds, developed and favoured by commercial producers, may produce litters ranging from 14 to 20. There are even some hybrid “super sows” – often described as hyperprolific – which can produce many more.

Although a range of factors can help or hinder litter size, it is generally accepted that traditional or ‘heritage’ breeds are likely to have fewer piglets per litter than modern breeds. The most popular breeds are those which not only turn out decent-sized litters, but are, more importantly, able to build a heavy, meaty carcass extremely quickly. They are, in order of popularity:

Understanding pig reproduction
The more a pig breeder knows about how the reproductive cycle works, the better he or she will be to improve chances of a successful mating. Here are some key facts:

• Gilts will generally reach sexual maturity between 150-180 days (five to six months) after birth – this can be earlier in some of the fast-maturing Asian breeds. That said, just because a gilt has reached puberty and is able to breed, that doesn’t necessarily mean the time is right. It is recommended that you wait until the third oestrus cycle before breeding, when the gilt will be at least 210 days (seven months) old. This third heat will be much stronger than the earlier ones, offering a better chance of a good mating. It is often said by commercial breeders that a pig should have her first litter by her first birthday, but traditional or heritage breeds often benefit from being allowed to grow on a little first, and then served at 10 to 12 months.

• Obesity can cause conception problems, and too much fat around the cervix also makes farrowing more difficult.

• Sows are most fertile five days after weaning a litter.

• Normally, a pregnancy has been achieved if there is no return to season 18 to 22 days after mating.

• If the pig comes back into season 23 days or more after being served, she may have lost the pregnancy. Think back – were there any unusual occurrences which could have caused this to happen? If you have similar results in a few sows or gilts, consider having your vet take some samples for lab tests to rule out reproductive diseases.

Managing matings
Both pigs to be mated should be in good shape, neither fat nor underweight. If your sow has only just weaned a litter, check her body condition and postpone service if she is too thin. Always use a boar which has an active working life, because you don’t want stale sperm. Equally, it is important not to over-work the boar; at most, allow one service per day, so keep him separate from a sow or gilt until ready to serve. Another benefit of keeping the female separate from the boar between mating sessions is that the female’s ‘standing’ response will be better than if she was constantly with him, allowing a more spontaneous and efficient mating.
Get the timing of service right. The signs that a sow or gilt is almost ready include a swollen, pink vulva, behaviour changes, and vocalisation. However, she won’t actually ‘stand’ until she is in full oestrus – normally a day or two afterwards, when the swelling starts to subside.
Ovulation occurs two-thirds of the way through ‘standing’ oestrus, and the best time to serve is 24 hours earlier. Keep testing the ‘standing’ reflex by pressing on her back. If, for example, she stands for the first time in the morning, mate her (or administer artificial insemination) that afternoon, and then again 12 to 16 hours later.
Find a safe place for mating – somewhere with non-slip conditions underfoot and preferably away from distractions, such as other pigs. Young, inexperienced boars may need some assistance first time.
Post-service, do nothing that makes a significant change to the sow or gilt’s everyday routine. Appropriate aftercare is vital for fertilisation of the eggs and implantation of the embryos to succeed. It’s important to keep the sow or gilt relaxed and free from stress, and making sure she has a good-quality, nutritious diet. Research has shown that daylight (12-16 hours per day) benefits pregnancy, so if your pigs are being housed indoors, think of ways of getting more light into the building, such as painting the roof and walls white to increase reflection.

Disease and reproduction
Several diseases can have an impact on fertility and the viability of a pregnancy. Often the most devastating are only evident at farrowing time, when stillborn or mummified piglets appear, or when only a few are born live. Erysipelas and Porcine Parvovirus (PPV) are two of the most common diseases, and both can be vaccinated against.

Erysipelas has a serious detrimental effect on reproductive ability in sows and boars, as well as lameness, arthritis, heart disease – and death. The bacterium Erysipelothrix rhusiopathiae is easily transmitted between animals. It has been estimated that up to 50% of all healthy pigs are carriers and, once introduced into a herd, it cannot be eradicated.
PPV kills developing piglets in the uterus and is widely believed to be the most common and most significant cause of reproductive failure. Around 90% of breeding herds in the UK have it; it is transmitted through the nose or mouth, passes into the intestine, and is shed in faeces. Within three weeks of infection, it crosses the placenta and attacks the developing embryos and foetuses.

Record keeping
Each sow should have her own health and farrowing record chart. Take a pocket book or mobile phone whenever you go into the farrowing area, so that you can make birth notes: duration; time between each piglet; problems requiring assistance; stillborns; and abnormalities. Note any unusual sow behaviour, such as aggression towards newborns – or handlers – or whether she clumsily crushes or injures any piglets. Cull out poor or problematic breeders.