The Benefits of Organic Free-Range Chicken 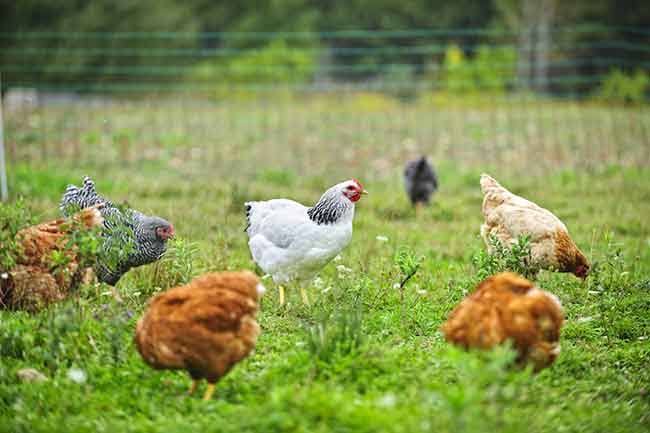 The Benefits of Organic Free-Range Chicken

If you’ve ever seen the chicken housing inside a conventional mass-production farm, you’ve likely already switched to buying free-range chicken. Movement, sunlight and fresh air positively affect human health, and they do the same for livestock. Although certification for meat and poultry is less stringent and less straightforward than it is for produce, the U.S. Department of Agriculture has recently refined its rules. In fact, the “organic” label now says more about the chicken’s living conditions, as well as the food it was fed and the overall way the farm was run, than “Free-Range

The term “free-range” means that the chicken had access to the outdoors, rather than spending its entire life in a cage the size of a sheet of paper, which is what happens on most conventional, high-volume farms. This rule is very vague, however, and could mean that the “outdoor access” consists of nothing more than a small cement slab on the side of the barn. To address this, the United States Department of Agriculture enacted the Access to Pasture rule for organic livestock in June 2010. So, while the term “free-range” doesn’t have much regulatory meaning, the term “organic” now covers pasture access. This rule means that chickens labeled “organic” are not continuously confined except for veterinary care or shipping, and that they actively forage on pasture to supplement the grains they’re fed.  chickens will eat small amounts of vegetation and grass-dwelling insects, both of which provide supplemental nutrients.

Read also: How to make poultry farming a profitable business

Farmers who produce organic chickens must do so in accordance with the National Organic Program to carry the USDA Organic seal. This means that the chickens must be raised from egg to slaughter in a way that nurtures the ecology of the site, including the health of the pasture, proper waste disposal, conservation of resources and the maintenance of vegetation and wildlife on the farm (see References 1). Meeting the National Organic Program standards makes the entire operation more sustainable.

Chickens who are raised organically have been fed an organic feed — feed raised without the use of chemical fertilizers or pesticides — for their entire lives, and they have never been injected with hormones or antibiotics. Technically, the USDA does not allow hormones to be used in raising chickens at all  but the organic certification means that the producer actually proved that no hormones were administered.

The use of antibiotics is frowned upon because although they are used to treat infectious diseases that can spread from chicken to chicken, they often miss bacteria like campylobacter, which are responsible for food-borne illness. When the chicken is slaughtered, the harmful bacteria contaminates the meat, and can end up causing illness in whoever eats it. Conventional producers try to use antibiotics to fight illnesses that are in part caused by poor living conditions in confined quarters; producers that are committed to creating organic systems are in a way practicing preventive medicine and don’t need to overuse antibiotics. Although more research is needed, there is speculation that antibiotics in food may help create resistant “superbugs” in humans that thrive after building a tolerance to common antibiotics.

A 2001 study at the University of Perugia, Italy, found that chickens raised organically actually taste better. The access to the outdoors encouraged movement, which encouraged muscle growth and discouraged fat accumulation, which means a leaner, meatier chicken. Registered dietician Nancy Goodwin of the American Dietetic Association says that animals raised and allowed to forage on pasture contain more omega-3 fatty acids, alpha-linoleic acid and conjugated linoleic acid, but less overall fat than their traditionally raised counterpart, making them healthier for your heart.