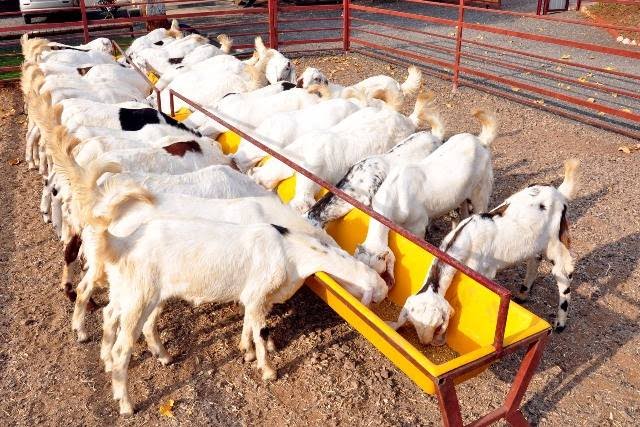 The secret of successful feeding is in devising a cheap and efficient ration. While preparing a ration for goats, factors like bulk, palatability, availability, price and digestibility should be considered along with the nutritive quality of the feed. Abundant clean, fresh water, changed every morning and evening should be made available to goats at all times. Some of the most serious diseases of goats result from the drinking of dirty water from shallow pools. Water troughs should be thoroughly washed at least twice a month. Goats in milk require more water than dry goats and should be watered regularly at least three times a day.

Feeding habits : Goats are sensitive animals with peculiar feeding habits. By the means of their mobile upper lips and very prehensile tongue, goats are able to graze on very short grass and to browse on foliage not normally eaten by other domestic livestock. Unlike sheep, goats relish eating aromatic plants in areas of scarce food supply and hence can penetrate deep into deserts. They are fastidious about cleanliness and like frequent change in the feed. Feeds given must be clean and fresh, since goats eat nothing that is dirty or foul-smelling. They dislike wet, stale or trampled fodder. For this reason, it is advisable to feed them in hay-racks or hang the feed in bundles from a peg in the wall or from a branch of a tree. Double-sided portable hay-racks are the most suitable and convenient for stall feeding. It is preferable to serve them small quantities at a time; when served in large quantities at a time, they waste a lot of it by trampling.

Goats are very fond of leguminous fodders. They do not relish fodder like sorghum/maize silage or straw. Goats do not relish hay prepared from forest grasses, even if cut in early stages, but very much relish hay prepared from leguminous crops. Some of the common green roughages liked by goats are : lucerne, berseem, napier grass, green arhar, cowpea, soyabean, cabbage and cauliflower leaves, shaftal, senji, methi, shrubs and weeds of different kinds; and leaves of trees such as babul, neem, ber, tamarind and pipal. The common dry fodders liked by goats are straws of arhar, urid, mung, gram, dry leaves of trees, and lucerne/berseem hays (which are the main forage crops for milch goats).

Nutrients required : The nutrients needed may be divided into maintenance, production and pregnancy requirements:-

b) Production ration : Requirements for the production of 1 litre of milk with 3 % and 4.5 % fat is 43 gm of DCP and 200 gm of starch equivalent (SE), and 60 gm of DCP and 285 gm of SE, respectively. The nutritional requirement of a goat weighing 50 kg and yielding 2 litres of milk with 4% fat may be met by feeding 400gm of concentrate mixture and 5 kg of berseem or lucerne. The ration should have 12-15 % protein content.

c) Pregnancy ration : The foetal growth in the last 2 months of pregnancy is rapid and the metabolic rate of the goat rises rapidly. During this period, the content of ration should be increased to the level of production ration. A week before she kids, the doe should be provided with more succulent type of food. For three or four days after kidding, the level of diet should be lowered and made more fibrous. This is necessary to minimize the shock to the goat’s udder. After this period, the feeding should be done at a normal rate.

d) Feeding of young stock : Performance of the adult stock depends on how they are reared when young. Feeding schedule for kids should be such that a weekly growth rate of 0.6 kg is obtained. The kids should be fed 56-112 gm of colostrum 4-5 times a day, depending on its birth weight, for three days. From the fourth day onwards, they may be fed the following ration schedule:-

e) Mineral mixture : the requirements of calcium and phosphorous for maintenance are 6.5 and 3.5 gm, respectively, per 50 kg body weight. Goats require slightly larger quantities of calcium than sheep. The mineral mixture may be included in the concentrate ration at the rate of 2 per cent.

f) Salt : Salt licks or lumps of rock salt of fairly good size should be hung up in some suitable place where the goats can easily get them. This is important as goats secrete a good amount of sodium and chloride ions in the milk.

g) Vitamins and antibiotics : Goats particularly need vitamins A, D and E. Vitamin A can be supplied by feeding green forage and yellow maize; 1 kg of lush-green fodder will provide 1500 IU. Vitamin D can be obtained by exposure to sunlight. Vitamin E is present in adequate amounts in most normal rations. Synthetic vitamins A and D may be supplemented in the ration of growing kids. Feeding of aureomycin or terramycin increases the growth rate of young kids, reduced the incidence of scours and other infectious diseases and improves the general appearance of the kids.