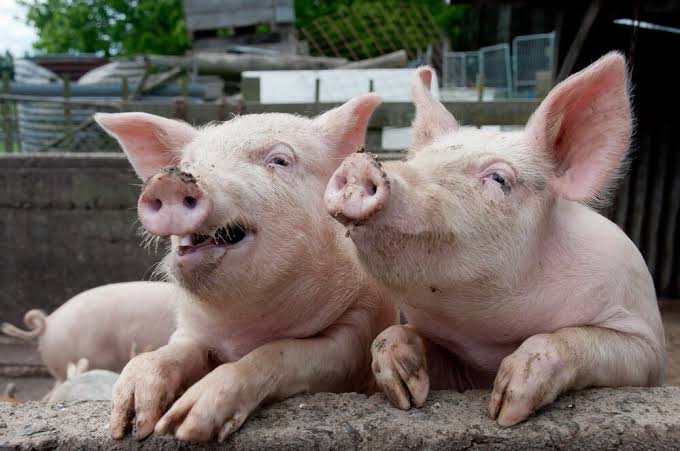 The symptoms of this disease are skin lesions, caused by an infection of the bacteria Staphlococcus hyicus. In severe cases, mortality can occur, as the bacteria damage the liver and kidneys. Lesions first present as dark areas of skin, which spread and become flaky with a greasy feel. Antibiotics are used to treat the infection, along with skin protectants; autogenous vaccines have also been used with success. Improving hygiene in piglet housing is key to preventing this condition, along with teat dipping of sows pre- and post-farrowing. It is also important to reduce the potential for skin abrasions, as this is how the infection enters the body. Abrasions are caused by rough floors, jagged teeth, sharp equipment or even mange mites bites.

This disease is very common in suckling piglets and is caused by three types of the intracellular parasite coccidia. It causes diarrhea, which can be bloody, often between 10 and 21 days of age and up to 15 weeks of age. Acute cases are treated with fluid therapy and coccidiostats. Secondary infections can result from damage to the intestinal wall. Depending on the level of occurrence on the farm, preventative treatment of sows with coccidiostats may be appropriate. Hygiene should be improved to end the cycle of infection; sow feces are a major source, and flies can spread infection. Providing a warm, dry, clean creep area will help to reduce the parasite load and the likelihood of coccidial infection.

Coughing, sneezing, abdominal breathing, reduced growth rates and potentially mortality are all signs of respiratory disease. Depending on the cause, antibiotics may be given in feed, water or as an injectable. Poor ventilation or environmental conditions can exacerbate respiratory conditions. For example, high levels of ammonia can damage the respiratory tract, making pigs more susceptible to infection. Infective agents include Streptococcus suis and Pasteurella. Vaccines are available for some forms of pneumonia, although the strain affecting a farm should be identified to ensure a successful outcome. Pleuropneumonia, caused by Actinobacillus pleuropneumoniae, can result in significant mortality, and those that do recover have impaired growth rates and lung damage. Overcrowded and dusty housing are predisposing factors for respiratory disease, along with the presence of PRRS virus.

Animals with this disease suffer from diarrhea, with or without the presence of blood. It is caused by the bacteria Brachyspira hyodsenteriae. Growth rates of post-weaning pigs are reduced, and, in some cases, sudden death can occur. Antibiotics are used to treat the disease, either in feed, water or as an injectable. Reducing stocking density can be an effective way of reducing infection pressure and stress in the herd. As well as improving hygiene levels, rodent control is a high priority; rodents are a vector for this disease. The strategy for buying and introducing replacement stock should be reviewed, as this a major route of disease introduction.

Reduced milk production, loss of appetite and a higher body temperature are symptoms of mastitis in sows. It is caused by a bacterial infection of the mammary glands, where skin discoloration can be seen. Antibiotics, along with anti-inflammatory drugs are effective treatments. Oxytocin may be used to encourage let down of milk and corticosteroids can be prescribed. Hygiene in farrowing housing is important, along with nutrition during late pregnancy to promote immunity. Stress can also be a factor, and it is important to make sure that teats are not being damaged by sow housing facilities. This disease has a significant effect on productivity because of the potential effect of reducing the number of piglets weaned by sows.

If pregnant sows become infected with parvovirus (PPV), reproductive disease can occur, but not in all cases. If it does, most commonly in gilts, reproductive performance is significantly affected. Mummification and stillbirths occur, resulting in small litter sizes. Other reproductive diseases have the same symptoms so accurate diagnosis is essential. Unusually, the virus can survive outside the host for several months, making it endemic in most herds. Although it is only during pregnancy that PPV is a problem, other pigs can spread the virus. There are no treatments available; in order to prevent this disease routine vaccination of gilts is advisable.

In terms of disease prevention, re-occurring themes include hygiene, ventilation and reducing stress. Pig producers need to provide an environment that is optimal for the animal and inhospitable for disease-causing agents. As well as reducing infection pressure, immunity must be promoted by measures such as optimal nutrition and good husbandry.

Prevention is obviously better than cure, and having a herd health plan will help to minimize disease incidence.

Maintaining good biosecurity through every part of the production cycle will go a long way to preventing disease outbreaks. Managers should also ensure that breeding stock are purchased from high health status herds and suitably quarantined before introduction. This article details six common pig diseases, but there are many others to be aware of depending on the farm location. Vaccines have been developed and are routinely given for many diseases. However, producers should remain vigilant and make sure that all stock people know the signs and symptoms of common diseases.