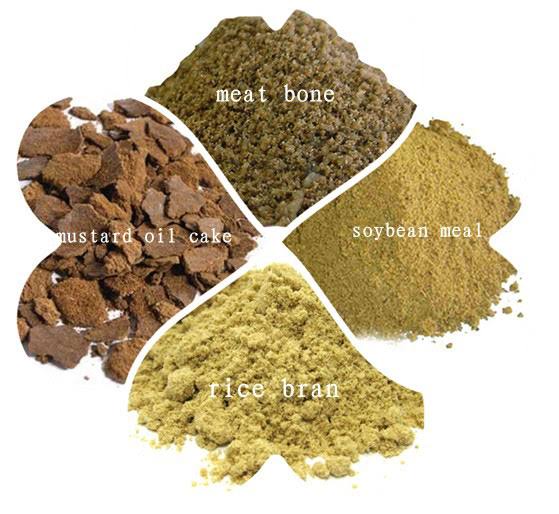 Since cultured catfish get only a small portion of their food nutrients naturally, they must be fed a complete feed. That is, one formulated to provide all required nutrients in the proper proportions necessary for rapid weight gain, high feed efficiency, and a desirable composition of gain (high protein gain and low fat gain). Feed cost is about half of variable production costs in catfish culture, so as a catfish producer, you should carefully consider feed selection and use.

No one feed ingredient can supply all of the nutrients and energy catfish need for best growth. Commercial catfish feeds contain a mixture of feedstuffs and vitamin and mineral premixes that provide the right essential nutrients as well as the energy necessary to use the nutrients. The amount of each feed ingredient depends on several factors, including nutrient requirements, ingredient cost, availability of each ingredient, and processing characteristics.

The main plant protein sources used in catfish feeds are oilseed meals, such as soybean meal, cottonseed meal, and peanut meal. Some other oilseed meals could be used but are not generally available on a timely basis and at an economical cost per unit of protein. A brief description of various animal and plant protein sources that can be used in catfish feeds is given in the chart on the next page.

Energy supplements are feedstuffs that contain less than 20 percent crude protein. The include grain and grain byproducts and animal fat or vegetable oil. It is important to include nonprotein energy sources in catfish diets because they are the most economical source of energy, and they prevent dietary protein from being used for energy. Energy sources typically used in commercial catfish feeds include corn, corn screenings, wheat grain, wheat middlings, rice bran, milo, animal fat, and fish oil.

Vitamin and mineral premixes are generally added to catfish feeds. They provide more vitamins and minerals than what is needed for growth to make up for any losses that may occur during feed manufacture or storage. They are made from high quality ingredients, using forms of vitamins and minerals catfish can readily digest.

Catfish feeds have generally been based on a fixed formula with little use of a least-cost approach as is used in other animal industries. To use a least-cost computer programme to formulate feeds, manufacturers must know the cost of feed ingredients, the nutrient concentrations in feedstuffs, nutrient requirements and nutrient availability from feedstuffs, and nutritional and non-nutritional restrictions.

Use of least-cost feed formulation is limited because we don’t know much about the nutrient levels that bring maximum profit in relation to levels that result in best weight gain, we can’t store large number of different ingredients at the feed mills, and getting a wide assortment of feedstuffs on a timely basis is a problem. But we can use a simple application of least-cost feed formulation used to formulate catfish feeds. Here are some examples of restrictions placed on nutrients and feed ingredients for least-cost formulation of catfish feeds.

Read also: steps to take in starting a fish hatchery and fingerlings production

Feed manufacturing puts mixtures of feedstuffs and feed additives into a usable form. The main goal in making feedstuffs is to increase profits of animal production by increasing the nutritional value of the feedstuff or a mixture of feedstuffs.

Depending on the animal species, this process may range from a simple reduction of particle size to forming feed pellets through steam pelleting or extrusion. Catfish feeds are unique compared to feeds used for terrestrial animals grown for food because catfish feeds must be pelleted, water stable, and generally made to float on the water surface.

Thus most commercial catfish feeds are manufactured by extrusion. If a particular feed additive will not withstand extrusion, the feed may be manufactured by steam pelleting into a sinking pellet. Fat is typically sprayed on the feed pellets before shipping to reduce feed dust (fines).

Catfish feeds provide all the nutrients catfish need in a highly digestible form. Several feedmills manufacture catfish feeds. Commercial catfish feeds are similar in composition, are of high quality, and provide for rapid, efficient growth. Following are some examples.