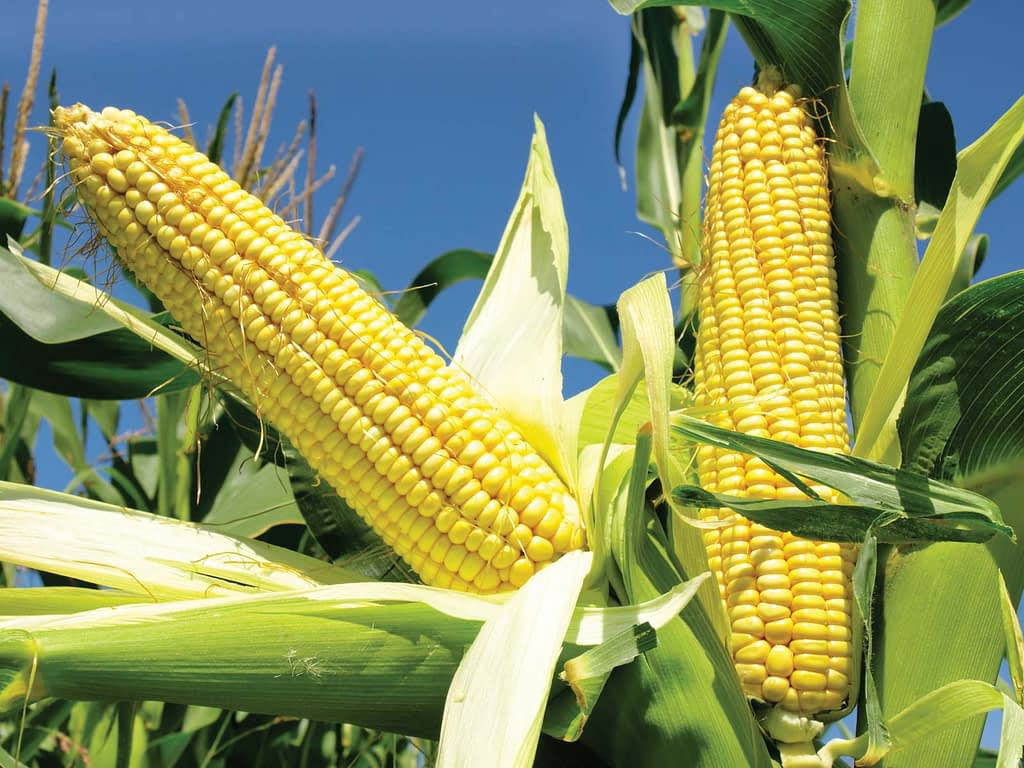 And maize is called queen of cereals, because it has highest genetic yield potential among the cereals.

Maize (Zea mays), also known as corn, is actually a cereal grain which is used for many different purposes.

It was first domesticated by the indigenous people in southern Mexico about 10,000 years ago, and today it is very popular throughout the world.

The leafy stalk of the plant produces pollen inflorescences and seperate ovuliferous inflorescences called ears that yield kernels or seeds, which are fruits.

The plants are often 3 meters in height (but some natural strains can grow up to 13 meters).

The stem is generally composed of 20 internodes of around 18 cm length. A leaf which grows from each node, is generally 9 cm in width and about 1.2 m in length.

Maize is in 3rd position in term of total staple food production. But a very little amount of total maize production is consumed directly by humans.

Most of the maize is used for corn ethanol, animal feed and for producing other maize products, such as corn syrup and corn starch.

Read also: what to do to boost your maize production

Maize is the domesticated variant of teosinte. Several theories had been proposed about the specific origin of maize in Mesoamerica.

Probably, it was first domesticated by indigenous peoples in southern Mexico about 10,000 years ago.

Maize is known by many other names in many different parts of the world. It’s other names include corn, Indian corn, sweet corn, mealie etc.

Maize is also known by some other local names in many different languages. It is known as Mielie in Afrikaans, Makki or Makai in Hindi, Bhutta in Bengali, Makoi in Assamese, Makai in Gujarati, Musukina Jola in Kannada, Cholam in Malayalam, Maka in Marathi, Makaa in Oriya, Iringu in Sinhala, Jola in Tulu and Mokka Jonna in Telugu.

First of all, select a good location for maize farming. Maize plants grow well in fertile soil with pH ranging from 5.5 to 7.5.

They can be grown on wide range of soil types including loamy, sandy loamy or clay loam soil (heavy clay soil is not good for maize farming).

But the soil needs to be rich in organic content and have to have good water containing capacity.

For preparing the soil, first of all remove all the weeds and remains of previously grown crop from the field.

Then plough the land to bring the soil to fine tilth. 6-7 ploughing and harrowing will be required for making the soil fully prepared for maize farming.

The maize plants are grown throughout the world, and the plants can grow in a wide variety of climatic conditions.

It is actually a warm weather crop and doesn’t grow well in the areas where the minimum daily temperature is less than 19 °C.

The seeds can germinate as low as 10 °C, but the germination process will be faster and less variable at soil temperature of 16 °C to 18 °C. And maximum temperature for maize farming is 30 °C to 35 °C.

Maize is a warm season crop, and is cold-intolerant. The seeds must be shown in the spring in the temperate zones.

Actually, it can be grown throughout the year, but grow best between 21 °C and 27 °C temperature.

There are some different types of maize to choose from. The 6 major types of maize are sweet corn, flour corn, popcorn, pod corn, flint corn and dent corn. You should choose such a type which is widely grown and available in your area.

After selecting your desired type of maize, purchase seeds from any of your nearest market or seed supply stores.

Maize is very common and popular throughout the world, so you will easily be able to purchase seeds from your local market.

Total amount of seeds per acre depends on many different factors. Exact amount of seeds required per acre can vary depending on production purpose, seed size, season, plant type and sowing method.

The maize seeds are planted in rows. But space between rows and between plants can vary depending on the maize type.

Spacing the rows to about 2 feet apart and the plants to about 8 inches apart will be good for winter crop and both sweet and baby corn production.

You can sow the seeds manually by dibbling or by mechanically with help of tractor drawn ridger seed drill. And sow the seed to about 1 inch deep.

Before sowing, treat the seeds with fungicides for preventing seed and soil borne diseases.

Treating the seeds with Thiram or Carbendazim at the rate of 2 grams per kg seed will be good.

Taking additional care is must for successful maize farming business and for maximum yield.

The plants will grow better and produce more if you take additional care of the plants. Here we are describing more about the steps for caring the maize plants.

Controlling weeds is very important for successful maize farming business. Initially you should remove all the weeds from the field while ploughing and harrowing. And then at least 2 additional hand weeding is required. The first weeding should be done on 20-25 days and another is on 40-45 days after sowing. Mulching can help to control most of the weeds from the field.

Like many other commercial crops, the maize is also susceptible to some pests and diseases.

Contact your nearest agriculture extension office or consult with an specialist for having recommendation for controlling all these pests and diseases.

You can start harvesting when cobs outer cover turns from green to white.

Actually when the stalks have dried and moisture of the grain as about 20-17%, is the optimum time for harvesting maize.

All the types of maize are nutritious and good for human health. Raw, yellow sweet maize karnels are composed of 1% fat, 3% protein, 19% carbohydrates and 76% water, And a serving of 100 gram maize karnels provide about 86 calories and are a very good source of vitamin B, thiamin, niacin, folate and pantothenic acid. They also provide moderate amounts of dietary fiber and some essential minerals such as phosphorus and magnesium.