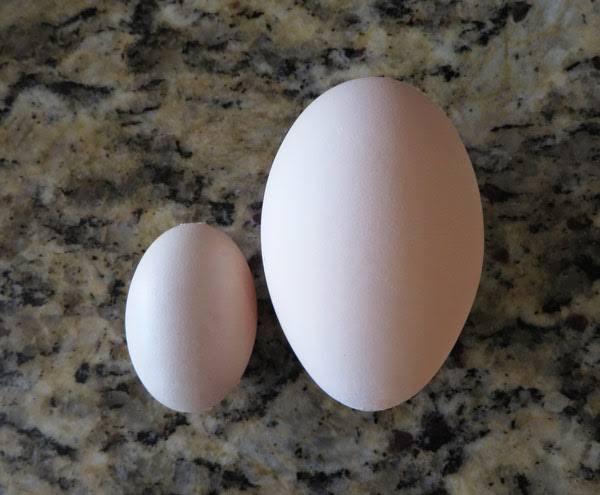 The genetic make up of a layer variety determines its range of possible performance results. Within this genetically defined range, we can alter the production characteristics through our management systems to optimize these traits which are most profitable for our market. Based on International market levels eggs are sold on the basis of egg size. Much preference is given to egg size, whereas in Indian markets the eggs are not graded according to egg size. But still the consumer preference is towards large egg size. Hence poultry farmers have to give equal emphasis towards the production of large number of eggs with maximum egg size.

The factors affecting egg size can be discussed under the following heads:

Light breeds mature about a month earlier than heavy breeds. Depending upon the strain of the bird differences in size and appetite leads to variation in egg size. Chickens can be developed to lay large, medium or small eggs. Brown egg layers lay larger size eggs, which is related to body size and feed intake. Egg weight is high for heavy breeds than light breeds.

Genetic selection has been advancing the rate of sexual maturity by about one day per year. Early maturity can be a valuable trait if the necessary body weight can also be attained. Egg weight or egg size being a highly heritable trait can be improved by selection. When improvement is needed for highly heritable traits like egg weight, selection of individuals based on their phenotypic performance yields satisfactory results. This is known as individual selection. Most of the breeders develop strains which will produce egg sizes required by the market. Random Sample test results are a very good guide for comparing the egg size of different strains in the market.

Egg weight may be influenced either by maternal or sex-linked effect depending upon the strain. Egg weight is a polygenic and highly heritable trait showing continuous variation, and can be measured or quantified. Hence they are known as metric or quantitative trait and determined by many pairs of genes.

Read also: How to feed layers for a longer production cycle and high performance

By weighing every week it is easier to identify the factors responsible for slow growth. Weighing should coincide with the changes in feed. If the flocks are not at the target body weight for their age, the feed change should be delayed to give the underweight birds a chance to catch up. The weights of the birds on the return side of the feeder line should be compared with the supply side to ensure that pullets are being fed frequently enough.

A pullet will grow at its maximum rate between 6 and 8 weeks of age. This is the optimum time in which the skeletal structure of the bird reaches its adult size and the oviduct matures and prepares for the onset of egg production.

There is a close negative relationship between egg production and egg size. Proper managemental aspect should target at uniform body weight in a flock and also in uniform and co-ordinated sexual maturity. A in production leads to an increase in egg weight as the bird maintains egg mass. A flock with poorer production has a higher egg weight, particularly after peak. In this case the egg size increases but there is a drastic reduction in egg numbers which is not a desirable condition. Hence, a healthy flock with good production and egg size is preferred.

The proportion of albumen and shell tend to decline with age, while the yolk increases. This in turn increases the egg weight.

It is generally assumed that the feed intake of laying hens will vary with the energy content of the feed. In other words, higher energy rations result in lower feed intake. While this usually does occur, the expected decline in feed intake is seldom fully achieved. The result is a net increase in energy intake for the hen. Feeds formulated with low energy ingredients often result in insufficient energy intake for hens to maintain good production. It may not be physically possible for these hens to consume enough feed to meet their energy needs, especially during the time of peak production. In such situations, egg size will be the first production trait to suffer. The decrease in egg size is a result of dietary and body proteins to be utilized for energy, precluding their use for egg mass formation. At the beginning of lay, increasing hens intake of balanced protein results in increased egg size. Feeding higher levels of protein at onset of lay means that egg size will increase more rapidly. A limiting factor in the increase of early egg size is a sub optimal energy intake. With low energy levels, increasing protein levels may not increase egg size.

The relationship between increased egg size and increased protein intake has been reported and established by numerous researchers. At low protein intakes, there has been an indication of reduced egg size when energy intake is increased. Moreover, increase in specific amino acids such as methionine (at 2% cysteine) has been reported to have an almost linear effect on egg size. Reduction in total feed intake, intake of total protein, and total sulfur-containing amino acids (TSAA), such as methionine and cysteine, will help control gains in egg weight after peak production.

Increasing levels of linoleic acid early in the pullet production cycle may help increase early egg size. Reports show that 1% linoleic acid in the diet appear to be adequate. But increased levels of linoleic acid has no specific effect on egg size.The most important nutrients for control of egg size are linoleic acid, protein and some specific amino acids. Reducing the level of one, or a combination of these nutrients in the diet will reduce egg size.By increasing the percentage of fat portion of the energy source, early egg size can be increased. It is easier and more effective to control increases in egg weight than to reduce it once the desired weight is surpassed.

Altering egg size through increasing specific sulfur amino acids has led researchers to the use of enzymes to increase their availability. Enzyme combinations such as xylanase and other enzymes enhance the availability in a variety of formulations by freeing protein trapped in a fiber matrix. In addition, by using enzymes the age-associated decline in egg strength may be reduced.

One way to improve pullet body weights at the onset of egg production is to delay sexual maturity. Early maturity can be a valuable trait, provided the necessary body weight has been attained. However, if at least the standard body weight is not present at 18 weeks, the light stimulation of the flock should be delayed until the standard body weight is attained. Larger early egg weight is often the result of birds being heavier at sexual maturity. Encouraging more feed consumption early in the laying period will also promote larger early egg size. Management practices such as increasing the frequency of feeding or lowering house temperature can increase feed consumption. Sexual maturity can be delayed by using a lighting program that “steps down” the amount of light given to the pullet flock during the growing period after nine weeks. Research on Ahemeral lighting system with the light cycle of more than 24 hours (28 hours) has resulted in increase in egg size and specific gravity. The improved egg size continued after the birds were returned to a 24 hour cycle.

Stressful events at the time of maturity can have profound effects on body weight gain. If possible, stressful management practices such as moving or handling birds for vaccination or beak trimming should be avoided during this period.

Beak trimming is best completed prior to six weeks of age. The most appropriate time for the first beak trimming is seven to ten days of age, with the second beak trimming, if necessary, done at six weeks. Birds will recover more quickly and suffer less growth suppression from an early beak trimming.

Move pullets to the lay house early to avoid overcrowding of pullets. Moving pullets into the laying unit late (18 or 19 weeks of age) can be harmful because pullets may become overcrowded for the final two weeks prior to moving. This can result in restricted feed and water consumption for some birds. Late overcrowding of pullets can be avoided by moving at 15 to 17 weeks of age.

It has been well documented that some infectious diseases can have an adverse effect on egg quantity and quality. Any infectious process eliciting an inflammatory response could affect egg production through an effect on feed and water intake. In addition, there is a repartitioning of amino acids and proteins away from productive activities, such as egg production, towards the more immediate need for antibody production and other components of the immune response. Newcastle disease, infectious bronchitis and EDS-76 are known to cause in egg production and the formation of weak and defective eggshells because of direct damage to the oviduct.

Egg Drop Syndrome -76 leads to sudden and variable in egg production (about 35-40%) and production of depigmented, cracked or shell less eggs with low egg mass production

Mycoplasma gallisepticum (MG) and Mycoplasma synoviae (MS) could play a role in problems of poor egg size and quality through the interaction with Newcastle, bronchitis and other respiratory pathogens.

Several factors influence the size of an egg. The major factor is the age of the hen. As the hen ages, her eggs increase in size. The breed of hen from which the egg comes is a second factor. Weight of the bird is another. Pullets significantly underweight at sexual maturity will produce small eggs. Managemental factors that influence egg weights are lighting, heat, stress, overcrowding and nutrition. All of these variables are of great importance to the egg producer. Careful flock management benefits both the hens and the producer.

Previous articleFISH FARMING IN NIGERIA:  4 FACTS YOU SHOULD KNOW
Next articleChicken Farming Business Plan For Beginners