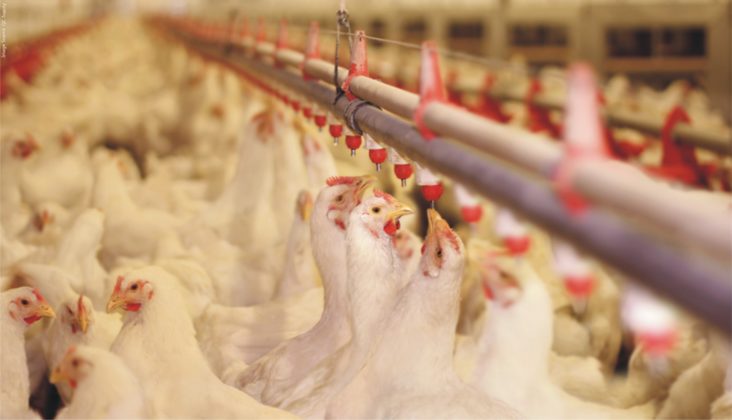 In the last few decades, poultry industry has shown a tremendous growth all over the world. Consumption of chicken has increased due to its versatility as a food, and considered as healthier meat than from other sources. As poultry industry progressed, disease outbreaks and its associated challenges have become more common and costlier to manage. Recently, the Newcastle disease (ND), low pathogenic avian influenza (LPAI) and high pathogenic avian influenza (HPAI) have become endemic, resulting in heavy losses to poultry industry. During the disease conditions, poultry farmers rely more on medication and vaccination for control measures. This is associated with high costs, and more often the success may not be guaranteed. Strict biosecurity measures along with vaccinations are adopted to control some contagious poultry diseases, as vaccination alone is not enough to control diseases in field conditions.

Biosecurity refers to the management practices aimed at excluding or reducing the transmission and spread of diseases to animals, humans or an area from the disease causing agents. “Bio” refers to life, and “security” indicates protection. Biosecurity is the key factor for better chicken health and profitable poultry production. It is accomplished by maintaining the poultry shed in such a way that there is a nominal traffic of biological organisms (viruses, bacteria, rodents, etc.) across its borders. Biosecurity is the most cost-effective means of disease control management and defined as ‘informed common sense’. Biosecurity is based on two fundamental principles: bio-exclusion,“preventing the introduction of a disease agent ontoa farm” and bio-confinement, “preventing the spread of a disease agent onto a farm” (Figure-1). Thus, biosecurity has become the huge factor for minimal loss for poultry stakeholder and emerged as a phenomenon for poultry farming.

As introduction of pathogenic organism causes serious economic loss to the poultry producers and farmers, securing the poultry flocks and farms from harmful pathogenic agents(microorganism) plays a vital role in poultry production. By implementing the biosecurity steps at all the stages of farming will help to avoid outbreak of diseases. Thus, the practice of biosecurity measures is a beneficial approach for the successful management of poultry industry.

Previous articleHow to Grow Rice: A Guide to Growing Rice
Next articleCaring for chickens in your back yard: ten questions to ask yourself before you start.