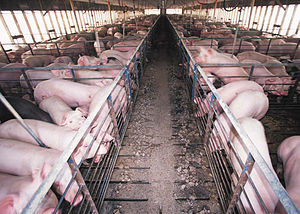 The environmental impact of pig farming is mainly driven by the spread of feces and waste to surrounding neighborhood, polluting air and water with toxic waste particles. Waste from pig farms can carry pathogens, bacteria (often antibiotic resistant), and heavy metals that can be toxic when ingested. Pig waste also contributes to groundwater pollution in the forms of groundwater seepage and waste spray into neighboring areas with sprinklers. The contents in the spray and waste drift have been shown to cause mucosal irritation, respiratory ailment, increased stress, decreased quality of life, and higher blood pressure. This form of waste disposal is an attempt for factory farms to be cost efficient. The environmental degradation resulting from pig farming presents an environmental injustice problem, since the communities do not receive any benefit from the operations, and instead, suffer negative externalities, such as pollution and health problems. The United States Agriculture and Consumer Health Department has stated that the “main direct environmental impact of pig production is related to the manure produced.

Many intensive pig farms store the swine waste in vats often referred to as lagoons. These lagoons often contain pathogens such as salmonella, pharmaceuticals like antibiotics and antimicrobials, as well as nitrogen and phosphorus. This can lead to widespread pollution within the watershed the farm is located within, if the water from these lagoons leaches out into the soil and trickles down into the water table beneath. Unlike human sewage, which is always treated with chemical and mechanical filtration, the waste from these lagoons is untreated when it is released back to the environment. Spills are the most common contributor to pollution, but regardless of spills, toxic nutrients like nitrates and ammonia can seep into the water table located just below the surface, infecting the groundwater that nearby communities drink. It has been estimated that 35,000 miles of river across over 20 states has been contaminated by manure leakage. Some of the causes for the environmental problems are inadequate sewage treatment and lack of developing technologies. Many farms lack adequate wastewater treatment systems, which release untreated wastewater to release into the environment in the form of contamination.

Some spills and leakage of contaminated waste are not accidental. In 2014, Mark Devries used spy drones to expose pig farms in North Carolina that were spraying untreated fecal waste into the surrounding areas, allowing the waste to dissipate into far-off communities. Smithfield Foods, the company responsible for one such factory, claimed this was a tactic used to fertilize its fields. It is true that historically hog feces have been used as fertilizer and can be done safely and without runoff, but the magnitude was described by Dan Whittle, a former senior policy associate at the North Carolina Department of Environment and Natural Resources, as a “mass imbalance”, with far too great a magnitude of fecal matter being sprayed for the crops being generated to not have significant spill off into neighboring plots of land. Many residents of the surrounding areas of such farms complain that the industrially concentrated fecal matter creates an unbearable odor of a different magnitude than typical farm manure. Charlotte Savage, a resident who lives on a property separated from the Smithfield farm by an 80-foot path of forest, reported seeing her husband Julian faint at one point due to the smell, and that their house was also once surrounded by a three foot deep puddle of fecal matter. This was described as a common occurrence in this community and many others.

Read also: Benefits of Starting a pig farm in 2022

Communities located near factory pig farms experience negative health and environmental effects due to several factors associated with industrial pig farming. One main issue that arises out of intensive animal agriculture is the waste that the huge number of animals produce. Pig waste is similar to human waste; filled with bacteria and high amounts of ammonia. At most intensive pig farms, hog waste is kept in large open-air pits called lagoons where waste is broken down by anaerobic bacteria and then sprayed onto crops as fertilizer. This is called the lagoon and sprayfield system and remains legal in the United States, including in states like North Carolina where there have been on-going efforts in the NC legislature to ban open-air lagoon and sprayfield system practices in the state and replace these with more environmentally sound waste management practices.

The waste then reaches neighboring towns, resulting in civilians not being able to even leave their house in order to avoid pig waste filled air. People living in nearby towns have suffered a variety of adverse health effects including respiratory diseases, infections, increased risk of cancer, and other health risks.

The nitrogen from pig waste can also contribute to acid rain in the local areas; team of scientists from the US Agricultural Research Service and the US Department of the Environment has examined and noted that within wastewater lagoons in North and South Carolina, there are a host of genes involved in the process of turning ammonia into nitrogen.

One case study, conducted by Environmental Health Perspectives, sought to prove that malodor and pollutant concentrations from swine operations are associated with stress, altered mood, and increased blood pressure. For two weeks, adult volunteers living near swine operations in North Carolina sat outside for ten minutes twice a day. They reported levels of hog odor, and recorded their blood pressure. The study found that like noise and other similar environmental stressors, the malodors from the swine operations were likely associated with an increase in blood pressure, which could contribute to an increase in chronic hypertension.

There are many documented incidences of disease outbreaks occurring due to the presence of pig farms in a given community, particularly industrial pig farms. MRSA (Methicillin-resistant Staphylococcus aureus, a type of anti-biotic resistant bacteria) outbreaks have been correlated to an individual working in a pig farm, likely attributed to the strong antibiotics often used in industrialized pig farms. Other diseases can also spread in pig farms such as Salmonella, Toxoplasma, and Campylobacter. Many of these diseases are preventable given proper safety precautions such as washing hands and clothes, wearing face masks, and covering any open wounds when coming into contact with pigs. Improvements in farmer education about diseases are often cited as the reason for the lack of increase in disease outbreaks in North Carolina despite an increase in pig population by a factor of four in the years leading up to 1998.