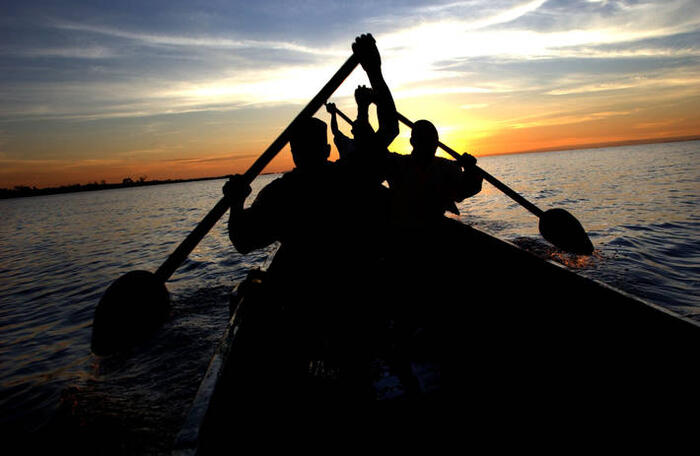 New analysis and modelling released by FAO and more than 100 collaborating scientists projects that by 2050 climate change will have altered the productivity of many of the planet’s marine and freshwater fisheries, affecting the livelihoods of millions of the worlds’ poorest people.

While the productive potential of fisheries in exclusive marine economic zones (EEZs) — those 200-mile wide swathes of land-adjacent ocean territory that every coastal nation has special rights to exploit — could decline less than 12 percent on average, this masks more significant fluctuations of productive potential at regional level, models suggest.

The planet’s critical but often-overlooked inland water systems — which include five of the world’s least-developed countries among its top 10 fish producers and provides 11.6 million tonnes of food for human consumption each year — will also be affected, the report says.

These impacts are linked to changes in water temperature and pH levels, shifts in ocean circulation patterns, rising sea levels and altered rainfall and storm patterns causing species to change their distributions and productivity, corals to bleach, and aquatic diseases to become more common, among others.

The projections appear in a sweeping 654-page collection of global, regional and national analysis and information released today by FAO, which represents the most comprehensive publication on climate change and fisheries ever assembled.

Impacts of climate change on fisheries and aquaculture: Synthesis of current knowledge, adaptation and mitigation options includes both new research as well as unique synthesis of the most current scientific information on how a changing climate is altering the world’s oceans, lakes and rivers and reshaping the lives of the communities who rely on them.

And key chapter provides adaptation toolboxes and options to help countries cope — in ways that will also allow them to meet their adaptation commitments to the Paris Climate Agreement.

If appropriately implemented, the impacts of climate change can be minimized, the report says.

In particular he urged governments on the board of the UN’s Green Climate Fund to resolve their disagreements over funding.

The failure of the board during its meeting last week to agree on any big-ticket decisions, and in particular on the replenishment of the fund, means it could run dry next year, the FAO Director-General said.

“We are running the risk of having the most powerful element of the Paris Climate Agreement completely exhausted,” he warned.

“When we signed the Paris Agreement, it was a sina qua non condition that if we don’t help poorer countries to adapt then we will not be successful in implementing the agreement,” added Graziano da Silva.

In one modelling exercise in FAO’s report, based on the IPPC’s RCP2.6 “strong mitigation” scenario, fisheries production in marine EEZs would drop by between 2.8 and 5.3 percent by 2050. Under another, the RCP8.5 “business as usual model,” the decrease could range from 7 percent to 12.1 percent by 2050.

The biggest decreases are expected in the EEZs of countries in the tropics — mostly in the South Pacific, while in higher latitude regions catch potential will likely increase.

The report points out that even in areas where productivity will be negative affected, catches of fish could still grow — if countries implement adequate adaptation measures and effective fisheries management regimes.

Changes in catch levels will occur in part as a result of fish species changing their geographic distributions to respond to climate change. This has already been well documented in the Northeast and Northwest Atlantic, and also for high-value tuna.

As distribution shifts play out, new arrangements between fishers within national fishing fleets as well as between countries will be needed to allow for coordinated responses, the report notes.

Inland waters and aquaculture at risk

Productive impacts to inland water systems will vary from place to place, but no world region will be untouched. The report provides estimates how climate, water use and population stress in 149 countries will change, and explores the future evolution of the Yangtze, Ganges, and Mekong rivers in Asia; the Congo River Basin and the Great Lakes system in Africa; in Europe, Finland’s inland lakes; and in South America, the La Plata and Amazon River Basins.

In the case freshwater aquaculture, Viet Nam, Bangladesh, Lao PDR and China are estimated to be the most vulnerable countries, while for marine aquaculture, Norway and Chile, due to the scale of their marine fish farming systems and their reliance on just a few species, are most vulnerable.

A range of fisheries management tools already exist that can be used to respond to climate change, says the report, but many will need to be retooled to respond to specific needs in specific contexts.

To ensure adaptations are synergistic and do not lead to maladaptation, FAO groups these into three categories: institutional and management responses; strengthening and diversifying people’s livelihoods; and mitigating risk and supporting resilience.

The challenge of climate change can be met, according to FAO, and its new report indicates how to do so effectively, while minimizing impacts and maximizing opportunities.