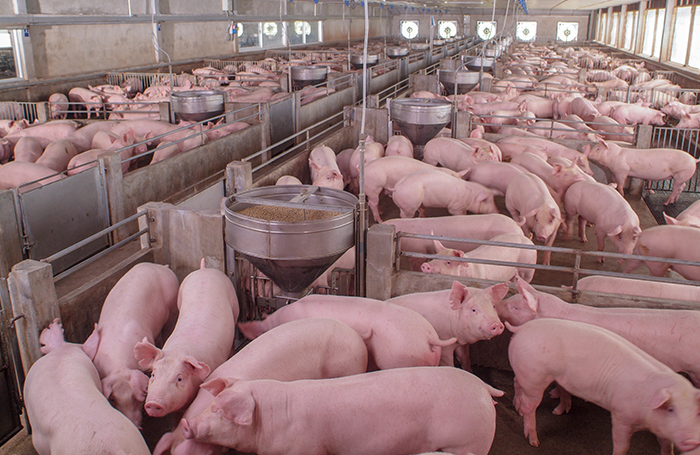 This set of growing-finishing (GF) swine diet formulas describe feeds used in the U.S. in conjunction with antibiotic growth-promoting agents for pigs from about 25 kg and up to 125 kg body weight.

The growing-finishing phase in pigs ranges from 25 to 125 kg body weight (double figures to get rounded U.S. ranges in pounds). This phase of production comes after that of the nursery one, regardless of pigs being transferred to another facility or raised in wean-to-finish facilities.

For convenience, there are four diets being fed, one for every 25 kg body weight as follows:

The first two diets are called growing (G), whereas the last two are called finishing (F).

In smaller farms, only two diets are fed (one G and one F), whereas in very small operations, a single diet may be fed during the whole growing-finishing phase. Conversely, in large operations, more diets are possible, often depending on how long it takes to empty each building’s feed silo. Usually, in such cases, a delivery with a different feed is possible every week. In all cases, the nutrient composition of the proffered diets is always calculated using the average of the initial and final projected weights for each sub-phase.

Corn and soybean meal are traditional staple ingredients used in feeding most pigs in the U.S., especially in the Midwest. Sorghum and some wheat are also used, where locally available, and canola meal may substitute some soybean meal when it becomes affordable to import from Canada.

In the past 20 years or so, corn distillers’ grains with solubles (DDGS) have become another typical U.S. ingredient for pig feeds. The maximum level of DDGS that can be used depends on quality and availability of the each available product, pig carcass concerns, and of course, individual nutritionist’s preferences and experiences.

The levels used in this set of GF diets can be considered as a middle-of-the-road approach. The important aspect here is that DDGS are introduced slowly from G1 to F2 so that pigs become increasingly accustomed to them. The increasing levels of DDGS influence greatly the incorporation of macro-minerals and amino acids because the nutrient profile of DDGS is distinct from that of soybean meal.

Another aspect of DDGS is that they can contribute a good amount of lipids in the feed, making the need for an additional lipid source almost unnecessary; some oil or fat is still recommended in order to reduce feed dustiness (if fed in meal form), whereas pelleted feeds might require less or even no additions at all.

First, regarding energy levels, a fixed average figure of around 3,350 kcal ME/kg was selected. Some nutritionists may prefer a scaling-down approach, especially for early maturing genotypes or those characterized with greater appetite, whereas the opposite is true for the contrasting genotypes.

A different approach is also recommended when sex-feeding is practices. Nevertheless, based on the selected ME level, (STID) digestible lysine levels were fixed to 1.0, 0.9, 0.8, and 0.7% for G1 through F2 formulas, respectively. Although, for some cases, the last formula may appear overgenerous, it should be remembered that super-lean genotypes and those of low appetites require even higher levels of lysine in the final phase, whereas not all pigs reach market age at 125 kg body weight.

All other amino acids presented here have been formulated using the ideal protein profile as recommended by the late D.H. Baker from the University of Illinois. In that, we have accepted that, as pigs grow in body weight, maintenance needs for amino acids other than lysine increase proportionally faster than what is needed for growth alone. We have opted in a scaled-up approach, taking into account the decreasing levels of soybean meal and increasing concentration of DDGS.

In regards to calcium and digestible phosphorus, the levels of phosphorus are kept near requirements, with emphasis placed on keeping the ratio of Ca:dP as close to 2.0 as possible. Small discrepancies are due to rounding of ingredient inclusion rates after formulation. The dietary electrolyte balance figure of around 150 mEq/kg was achieved in all diets except the last one, due to the low levels of soybean meal that contributes significant amounts of potassium (K). In fact, many nutritionists would add a bit of potassium chloride or potassium bicarbonate in the last diet to bring K up closer to 0.75% and then rebalance the dEB with sodium bicarbonate, if needed.

The required vitamin and trace mineral premixes should be added at recommended dosages. The exact level of each individual micro-nutrient is left at the discretion of each nutritionist. Some would prefer a fixed level across all GF diets, whereas others would add a diminishing amount in each successive diet. As for other additives, we have only indicated their presence by a place-holder amount of 1 kg per metric ton only to emphasize that they are to be included based on local conditions, preferences, and supplier-recommended levels. For example, many such formulas would contain phytase to reduce the need for inorganic phosphate additions. An antioxidant is also considered essential when lipid oxidation is expected to be a problem, e.g. prolonged storage and/or increase temperature and humidity.

Finally, the use of antibiotics and other growth-promoting agents is left at the discretion of the practicing veterinarian in consultation with the local nutritionist. At any rate, the last formula is left with any antibiotic additions to demonstrate the need to exercise caution when medications requiring a withdrawal period are used. If anything, the whole issue of additives demonstrates clearly that each formula is bound to be highly specialized in its final form due to local conditions.

As with the nursery formulas, these formulas were also formulated on a least-cost basis, but the final presentation was again done on a slightly more readable format. Thus, to illustrate the fact that soybean meal usage declined with each successive formula, while that of DDGS increased, we fixed those ingredients to an easily recognized pattern. As a result, all other ingredients had to be slightly modified to rebalance the nutrient specifications. This reflects one approach when formulating such diets — that is, fix the nutrients and allow ingredients to flow freely to match the nutrient specifications.

As manufacturing facilities may have limits on accurately weighing certain ingredients, most formulation programs have incremental steps for each ingredient, such as, say, 5-kg steps for ingredients in bulk like corn and soybean meal. In other mills, where multi-tone batches are mixed in mega-mixers, such refinements are unnecessary.

This approach is deemed ideal by producers, as only one such package is bought from a nutrition supplier and then local major ingredients are added on-farm; this is especially important for small-to-medium operations, whereas larger ones may prefer to manufacture the premixed package at one more sophisticated location and distribute it to their local feed mills that can handle items in bulk with greater ease. If this were the case here, we would have a completely different appearance of the formulas, reflecting a different way of formulating and presenting feeds.