Digestibility in the Rabbit Diet 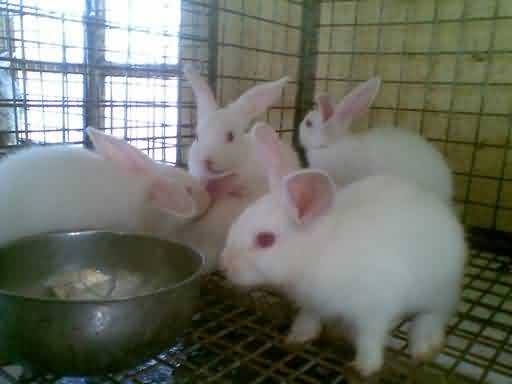 Digestibility in the Rabbit Diet

Rabbits have a very round-about, complicated way of getting their food digested, and they do not process all foods equally well. For instance, the ability of the post-weaning rabbit’s small intestine to digest fructose (fruit sugar) increases, while the ability to digest all other sugars decreases (Buddington 1990). So, a mature rabbit can easily digest (and get fat on) the sugar in fruit, whereas the sugar in a candy bar can make the same rabbit sick. This is because sugars and starches that the small intestine can’t digest will wind up in the cecum. If they arrive in large quantities in the cecum, they encourage the overgrowth of toxin-producing bacteria with consequent illness to the rabbit.Adult rabbits absorb protein in the small intestine (up to 90%), but this depends on the source. The protein in soybean meal is very digestible, but a high portion of the protein in alfalfa (which is largely bound to the plant cell wall) is indigestible to rabbits. Rabbits digest cellulose poorly. This seems a paradox for an animal who lives naturally on vegetation. But this is part of the plan. The low digestibility of fiber and rapid elimination of large, hard-to-digest particles enable the rabbit to “maintain a higher level of feed intake than it would other wise be able to”.

Indigestible fiber is indigestible whether it’s pulled off the bark of a tree or blended into a feed, yet the size and type of the fiber can affect the length of time it takes to pass through the GI (gastro-intestinal) tract.

Contrary to what you might expect, the large particles don’t get stuck inside the rabbit while the small ones exit easily. It’s the other way around.

One study used particles up to 5mm in marked feed, which passed in 5 hours. This may closely approximate the size of chewed hay. I can say with strong certainty–from caring for disabled, diapered rabbits on a monitored diet with strictly scheduled feeding times–that the oat hay I give my rabbits in the morning is passed by the afternoon (4-5 hours).

So which is more desirable, fast moving or slow moving particles? Some of both are needed: a sizable quantity of coarse indigestible organic material to keep the gut working at an optimum rate and enough (but not too much) digestible material to be absorbed in the small intestine and cecum.

How do you know when there is optimum movement? Try listening. You should hear normal “gut sounds” caused by the fluid ingesta mixing with gas as it moves along. Too much noise may indicate an irritated intestine, while no sound at all indicates stasis.

What Is a Balanced Diet?

1 Swallowed plant food is passed to the STOMACH from the PHARYNX through the ESOPHAGUS.

2 Muscular contractions squeeze and churn the food in a .circular path, separating food particles and mixing them with the gastric fluid of the stomach.

The stomach has two regions. The fundic region is lined with layers that are nonsecretory. Secretions from glands in the lining of the pyloric region include hydrocloric acid, digestive enzymes and mucus. “The stomach serves as a storage organ metering ingesta into the small intestine.

3 As the food particles exit the stomach enzymes produced in the pancreas and bile produced by the liver are secreted into the small intestine at the duodenum.

4 The major part of digestion takes place during passage through the small intestine. Fructose, most starches, and up to 90% of all protein are absorbed, while cellulose is not efficiently digested.

The duodenum is the primary area for neutralizing stomach acids and mixing of digesta. It receives pancreatic enzymes, involved in carbohydrate, protein and fat digestion and liver bile acids, important in vitamin and fat absorption. The jejunum is the major site of digestion and absorption. The ileum is the remaining portion and is characterized by lymph nodules in the submucosa.

6. Bacteria digest cellulose (small particles), most sugars, excess starch, and any remaining protein not digested in the small intestine; B-complex vitamins are produced along with volatile fatty acids, which are absorbed directly into the bloodstream.

The cecum is the blind end of the colon, with a capacity of two to three times that of the stomach. Continuously in motion, it mixes its contents by rapid contractions back and forth along its length. “There is a continual flux of material between the cecum and proximal colon.”  “The cecum contains symbiotic microorganisms that produce cellulase to break down the cellulose walls of plant cells.”

7.  Undigested fiber and waste (hard fecal pellets) pass through the large intestine along with vitamin-rich cecotropes (soft cecal pellets), which are formed from fermented cecal material. Cecotropes are higher in protein and water and lower in fiber than fecal pellets.

Colon/large intestine. The proximal colon winds forward toward the stomach. Segmental contractions separate the digesta into fecal pellets.The distal colon, at the level of the stomach, loops caudally to the short straight rectum.

8.  Cecotropes are consumed directly from the anus and returned to the digestive system (cecotrophy).

9 Protected in mucous membrane packages, cecotropes continue to ferment in the stomach for several hours, until they pass to the small intestine where the nutrients are absorbed.