Feeding Management of Cattle and Buffalo 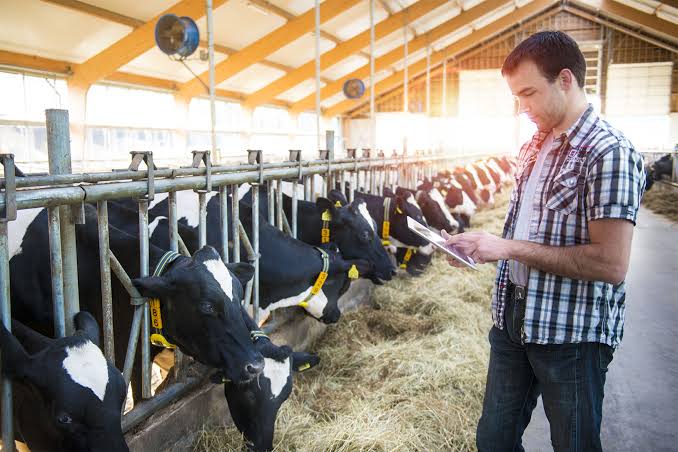 Feeding Management of Cattle and Buffalo

Recently, new variety of maize (Floury 2) was produced with high methionine and lysine.

Flaked maize decreases the acetic acid to propionic acid proportion in rumen and hence depresses the butterfat content of milk.

Nutritive value of Bajra is similar to Sorghum

They have 8-12% of crude protein and rich tannin content.

Seeds are hard so it has to be ground or crushed before fed to cattle.

Sorghum is similar to maize in chemical composition.

They have higher protein and low fat than maize.

Cattle are fed with ground Sorghum.

The crude protein and energy values are comparable to maize.

It is widely used for human consumption.

Based on the cost, it can be included in animal feed.

Methionine, histidine and tryptophan are deficient in oats but abundant in glutamic acid.

Cattles are fed with crushed or bruised oats.

Barley has high fibre content with 6-14% of crude protein

It has low lysine and less than 2% of oil content.

Barley is a main concentrate food for fattening animals in UK.

Verity “Notch 2” developed at UK is rich in lysine.

The endosperm contains prolamin (gliadin) and glutelin (glutenin) protein mixture, which is referred as gluten.

Strong gluten is preferred for bread making since it form dough, which traps the gasses, produced during yeast fermentation.

Finely milled wheat is unpalatable to animals because it forms the pasty mass in the mouth and may lead to digestive upset.

Do not feed finely ground wheat to farm animals.

Groundnut oilcake is one of the best protein supplements for livestock feeding and is extensively used.

Groundnut oil meal refers to solvent extracted residue and two grades (Grade I & grade II) are available in the market.

Groundnut oilcake refers to expeller pressed and two varieties (Grade I & grade II) are available in the market.

Groundnut oilcake has about 45% protein, which is deficient in cystein, methionine and lysine, but good source of Vitamin B12 and calcium.

In rainy season it is specifically labile to contain a toxic factor – Aflatoxins, a secondary metabolite of Aspergillus flavus.

Mould spoilage and Aflatoxin production can occur at any stage from growing crop to the formulated feed or stored raw material.

Aflatoxins are the most potent toxic, mutagenic, teratogenic and carcinogenic metabolities produced by the species of Aspergillus flavus and A.parasiticus on food and feed materials.

High moisture in the crop, which harvested around wet period and also inadequately dried products, favours the fungal growth and toxin production.

The most common symptoms in the affected animals are liver damage with marked bile duct proliferation, liver necrosis and hepatic tumors while the other symptoms include gastritis and kidney dysfunction.

Soybean meal contains 44% proteins with all indispensable amino acids except cystein and methionine since the concentrations are sub optimal.

It can be fed to all livestock up to 30% of the ration.

Like other oil seeds, raw soybeans have number of toxic and inhibitory substances.

These toxic, inhibitory substances and other factors in soybean like saponins can be inactivated by proper heat treatment during processing.

Sunflower oilcake contains 40% of protein with low lysine and twice the amount of methionine than soy protein.

It has very short shelf-life.

The expeller variety of Sunflower seed meal or cake has high content of polyunsaturated fatty acids, when fed in large amount to cows it makes butter soft.

It can be fed to cattle ration up to 20% level.

Sunflower oilcake is not recommended for calves.

It has a good quality of protein but with low content of cystein, methionine and lysine.

The calcium to phosphorous ratio is about 1:6, so calcium deficiency may occur.

Lactating cows can be fed with cotton seed meal but when it was given large amount, milk may become hard and firm, so butter made from such milk fat is difficult churn and may also tend to develop tallow taints.

It is an antioxidant and polymerization inhibitor.

It is toxic to simple stomached animals and the symptoms include depressed appetite, loss of weight and even lead to death due to cardiac failure.

Gossypol toxicity can be reduced by the addition of calcium hydroxide and iron salts.

Shearing effect of screw press in expeller process is an efficient gossypol inactivation.

The higher oil meals tend to get rancid and may cause diarrhoea; hence low oil content meal should be preferred.

It should be restricted to swine and poultry as it contains low protein and high fibre and low fibre coconut meal can be fed to monogastric animals with lysine and methionine supplements.

Coconut meal produces firm milk fat that is most suitable for butter making.

Linseed is rich protein source with low methionine and lysine content and also rich in phosphorous part of which is present as phytase but has only moderate calcium content.

It is a high source of vitamins like riboflavin, nicotinamide, pantothenic acid and choline.

It also has protective action against selenium poisoning.

Linseed oil meal refers to solvent extracted residue and two grades (Grade I; grade II) are available in the market.

Among the oilseed residues linseed is unique because it readily dispersible in water, forming a viscous slime due the presence of 3-10% of mucilage.

Cyanogenetic glycoside, linamarin and an associated enzyme, linase in immature linseed hydrolyses it with the evolution of hydrocyanic acid.

HCN is a potent respiratory inhibitor and hence, depending on the species the minimum lethal dose taken orally has been estimated as 0.5-3.5 mg/kg of body weight.

Proper water washing, drying and storage can reduce glycosides in the feedstuffs.

Linseed oilcake refers to expeller pressed and two verities (Grade I; grade II) are available in the market.

Linseed oilcake/meal is a good food to ruminant. to expeller pressed and two verities (Grade I; grade II) are available in the market.

Linseed oilcake/meal is a good food to ruminant.