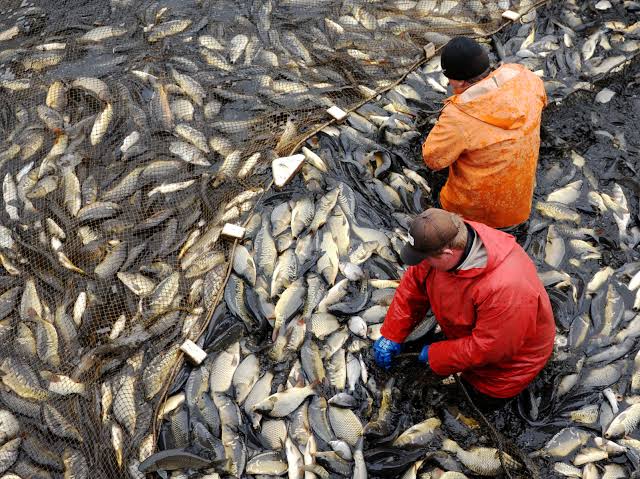 The environmental impacts associated with catching and farming fish commercially affect the health of our oceans, fisheries, communities and economies around the world.

The fishing and aquaculture industries are incredibly diverse, and the environmental issues highlighted here are not a problem in every fishery or fish farm‚ but all do occur as a result of some seafood produced for the UK market.

Improved technology, increasing demand and poor management mean that fish populations can come under very heavy fishing pressure and become depleted, or even collapse completely. The fish vulnerable to overfishing include certain stocks of popular species such as cod and tuna and long-lived, slow-to-mature species such as sharks and deep-sea fish.

The environmental issues outlined here can have indirect impacts as well. These may be wide-ranging and often unpredictable, affecting ocean life through food availability, competition between species and predator-prey interactions.

Fishing gear that is heavy or large can harm the environment while catching fish. Some fishing methods, such as dredging and bottom trawling, impact the sea-floor habitat. In areas with sensitive, bottom-living species, such as deep-sea corals, fishing gear can cause long-term damage.

Wildlife such as albatrosses, sharks, dolphins, turtles and porpoises can be caught and injured or killed by fishing methods, putting pressure on the survival of these already vulnerable populations.

Many marine animals that are caught unintentionally by fisheries lack economic value‚ they may be too small to sell legally or are unpopular commercial species. These animals are sorted from the profitable catch and discarded back into the water, often dead or injured. While the populations of these bycatch species may not be threatened, the number of individual animals unintentionally killed can be large in some fisheries and this impacts on the marine food web. Discarding can also occur when fishermen have filled their catch allowance (quota) for a particular species.

Fishing gear lost in the water or left behind by fishermen can kill considerable numbers of marine animals. Modern synthetic material does not biodegrade and gear lost, discarded or unchecked by fishermen can continue to catch fish, sharks and other animals indefinitely. Though now banned, drift netting on the high seas continues illegally and ghost fishing from these nets is a conservation concern

Farming carnivorous species, including salmon and prawns, requires large inputs of fish-feed composed largely of fishmeal and fish oil made from wild-caught fish. This demand for fish-feed places pressure on the wild fish used to make it. Vegetable protein, such as soy, can also be used in fish-feed. In some parts of the world soy, and other land based protein crops, are produced in an environmentally damaging way.

Waste from fish-feed and faeces can pollute the water and seabed around intensive fish farms leading to poor water and sediment quality. Chemicals and pesticides (used in some fish farming to control parasites and disease) can also contaminate the area and impact surrounding marine life.

Parasites and the spread of disease

Farmed fish infected with diseases or parasites can spread these to their wild counterparts, affecting the health of wild populations near fish farms. One notorious example is sea-lice parasites from high-density farmed salmon harming juvenile wild salmon in the surrounding water systems.

Farmed fish, such as Atlantic salmon, can sometimes escape and interbreed with wild fish populations. The farmed fish are not genetically adapted to the surrounding environment; as a result any hybrid offspring have reduced chances of survival. Escapees can also compete with wild fish for food and resources, adding pressure to the wild populations.

Sensitive natural habitats are sometimes converted into fish farms and this can have dramatic environmental implications. For example, historically, significant damage to delicate coastal habitats such as mangrove forests was well documented when establishing tropical prawn farms. This damage resulted in loss of beneficial ecosystem functions including natural coastal flood-defences, nursery habitats for young fish and water filtration.

Illegal, Unreported and Unregulated (IUU) or “pirate” fishing commonly refers to fishing operations that purposefully break the law and includes activities like illegal fishing gear, targeting species protected by law or fishing in prohibited areas. The main driver for pirate fishing activities is the enormous profit to be made in the seafood markets of Europe, North America and Asia. As a result IUU is a shady business that costs us globally between US $10-25 billion each year, and vessels particularly target poorer developing countries with limited ability to control their waters, stealing a crucial source of food and income. These vessels typically have poor fishing practices and the environmental issues of overfishing, habitat damage, bycatch and discards described here are particularly big problems in these illegal fisheries. While there have recently been steps in the right direction to address IUU, including the development of a European Regulation to prevent, deter and eliminate IUU fishing and an international Port State Treaty, there are still issues to be addressed. The ongoing campaign to eradicate IUU fishing is being led by groups such as the Environmental Justice Foundation (EJF), visit www.ejfoundation.org to find out more and get involved.

Previous articleHerbs and spices: a sustainable alternative to antibiotics?
Next articleHow to Treat Mange in Rabbits