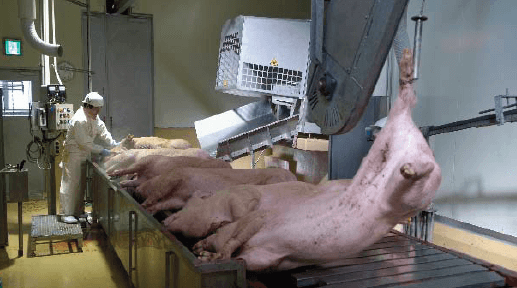 Pork is the culinary name for meat derived from pigs and it is the most commonly consumed meat in the world, accounting for about 38% of meat production worldwide. Pork is the most popular meat in Eastern and Southeastern Asia, and is also very common in the Western world. It is highly prized in Asian cuisines for its fat content and pleasant texture. Despite this huge popularity of pork, some cultures and religious sects forbid the consumption of pork.

The consumption of pork is on the increase. According to the USDA, nearly 100 million metric tons of pork were consumed worldwide in 2006. This number increased to 109.905 million metric tons of pork in 2015. China leads the world in pork consumption with half of the world’s consumed pork in 2017 occurring in China. Pork is very high in thiamin (vitamin B1) and with its fat trimmed, is leaner than the meat of most domesticated animals, but is high in cholesterol and saturated fat.

Pork can also become a very popular meat in Nigeria too. Due to the relative ease of raising pigs, compared to other animals, there’s a growing interest in pig farming in Nigeria. Pork can play a huge role in solving the protein deficiency in the diet of Nigerians and also contribute to employing millions of Nigerians. Pork has a very good value chain because many other products can be produced from pork making it a good source of income for farmers and a good medium for solving the unemployment problem in Nigeria. Some of the products that are derived from pork are sausages, ham, bacon etc.

However, in other for pig farming to reach its potential in Nigeria, farmers and entrepreneurs need to embrace the industrial processing of pork. This would allow the maximum, efficient and economic utilization of all the produce derived from pig farming.

Pork processing involves the slaughtering of pigs and modification of pig meat into different products and forms for human consumption and for industrial application. Several companies such as Marel, Frontmatec etc, produce modern pork processing equipment and systems that ensure efficient and effective processing of pork.

A modern pork processing system is made up of two key parts: 1. Pig Slaughter Line 2. Carcass Finishing. Each of these two key parts contain several sub-systems which are listed and explained below:

Handling of pork before they are slaughtered in the pork processing facility is essential for producing high quality pork. In meat processing generally, the meat quality is determined more by the animal handling system. This system consists of stables and runways which essentially manages and guides the live pigs with quality animal handling procedures towards the point of slaughtering.

Stunning is the process where the animals to be slaughtered are rendered incapacitated or unconscious before they are killed. Stunning is essential for operating an ethical and humane animal processing system. This system is responsible for this procedure. Stunning in pork processing can be accomplished with either CO2 gas stunning or via electronic means.

This system consists of the knives used for slaughtering the pigs and means for draining out the blood of slaughtered pigs. The system can be designed in either vertical or horizontal bleeding systems with ergonomic manual workstations to advanced hollow knife blood collection systems.

This is where the slaughtered pigs are doused with boiling liquid or steam to make it easy to remove their hair. The scalding method (traditional pull through scalding or the condensation scalding system) used in pork processing is becoming increasingly more important because of operating costs and the occurrence of cross-contamination from scalding water recycling.

After dehairing, the pigs are gambrelled or hooked and hoisted up to the buffer rail in front of the machine/ dressing line conveyor. There are several gambrelling tables with a fixed or moving top execution

This is the system responsible for removing the internal organs of the pigs. This process can be done manually or automatically with the overall objective of optimizing labour use, maximizing slaughter efficiency and minimizing contamination

Most modern pork processing plants are equipped with a quick chill tunnel. This system reduces the carcass temperature as quickly as possible in order to avoid unnecessary weight loss

This system is responsible for moving the cut pork to where they are loaded and packed for distribution to consumers.

Pork processing is the natural evolution for pig farming in Nigeria because it will encourage better production and utilization of pig produce so that pig farmers can earn higher incomes, consumers get affordable protein food sources and millions of Nigerian will be employed in the pork processing value chain industry. To see how a modern pork processing plant is run, sign up to watch our pork processing video tutorials.