Proper hygiene measures on the farm 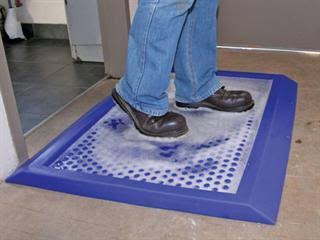 Proper hygiene measures on the farm

Professional poultry operations run the risk of not being fully productive as a result of poor sanitation standards. Diseases can easily occur, but proper measures need to be put into place to avoid this. The fight against these agents will be an on-going effort, and biosecurity measures must be the first line of defence in this battle.

There has been tremendous growth in the global poultry industry over the past decades. Some regions have reported a dramatic increase in the incidence of infectious disease outbreaks during this time of rapid expansion. However, in spite of difficult challenges facing the industry on a global level, poultry products (meat and eggs) still represent a major part of animal protein consumed by humans. Today’s consumers are generally more health-conscious and react strongly to perceived safety issues associated with the consumption of products of animal origin. Mad cow disease (BSE), avian influenza (AI) and salmonellosis are just a few examples of these contemporary concerns. Today, when the media tends to create hype rather than reporting the news, it is even more important to maintain a continuous vigilance to keep consumer confidence in poultry products.

Maintaining excellent health of poultry flocks is the primary objective of any producer, since a healthy flock can be translated into a profitable flock. Despite all progress in prevention and control of infectious diseases, it is still difficult to keep a commercial poultry facility completely disease-free. Commercial poultry farms continue to be affected by the emergence of new or variant disease agents. Diseases are generally responsible for mortality, as well as reduced growth rate and egg production in poultry flocks, thereby resulting in reduced economic returns to producers. The emergence of new diseases and variants of existing diseases are becoming more common in the industry. Genetic changes in micro-organisms might have, in part, also contributed to this situation. Similarly, genetic changes in the birds might have also altered their susceptibility or resistance to diseases. Global trading and travelling have made it difficult to keep diseases to limited areas or regions.

With the current tendency for regulatory agencies in many parts of the world to further limit the use of antibiotic growth promoters and therapeutic antibiotics, more effort must be directed at disease preventive strategies rather than the use of pharmacologic treatments. There are different sources or methods that can introduce diseases into a farm or spread infections within or between farms, including: human (employees, visitors); airborne transmission; carrier birds within a flock; birds in hospital/cull pen in a poultry house; birds recently obtained from an outside flock; forced-molted hens; eggs from infected breeder flocks; backyard, pet fowl, and wild birds; pet animals, rodents and insects; live-bird markets; contaminated feed and water, and; contaminated vaccines.

With the tendency for larger farms and with higher bird density, the above-mentioned methods of disease spread can contribute to dissemination of infectious agents, either directly or indirectly. There could be severe losses following a disease outbreak, or the emergence of a more pathogenic form of a given disease. Sub-optimal performance due to a disease can result in economic losses, although there are no exact estimates of losses associated with diseases. Specific factors such as virulence of the agent, immune status of the flock, previous exposure to immunosuppressive agents or conditions, housing design, stocking density, and environmental conditions are all variables that can influence the extent of losses following a disease outbreak.

Biosecurity is a term frequently used in the poultry industry. Many people believe that biosecurity is only implementing a strict visitor control and farm cleaning programme. In reality, however, a comprehensive biosecurity programme goes beyond these and includes many other components. In any commercial poultry operation, flock health must be excellent in order to achieve maximum profitability. Health status can often be directly correlated with the comprehensiveness of the biosecurity programme implemented in an operation. It should also be noted that competence of the immune system of birds is of critical importance.

Biosecurity is the efficient use of common sense hygiene procedures in preventing the adverse effects of a disease. It can be defined as “a set of management practices that, when followed, reduce the potential for the introduction or spread of disease agents onto and among sites”. In other words, biosecurity is an essential component of a disease control programme in the poultry industry. Some important considerations in designing a biosecurity programme are highlighted in Table 1. Clearly, a biosecurity plan must be adapted for each operation because each operation usually has its own unique situation. There is no standard formula applicable to all poultry farms.

When a disease outbreak occurs, people often tend to point fingers at someone or something else as being responsible for the introduction of the disease agent. This is definitely a wrong approach. Under these circumstances, everyone should make an effort to keep an open mind and to help investigate how the problem began in the first place. The objective is to solve the problem and not simply determine who was at fault. Problems need to be correctly diagnosed by all available means, otherwise they may recur in the next production cycle or on other farms within the company. The worst excuses that are often heard during a disease outbreak are “nobody told me that before” or “I did not know that”. Thus, it is imperative that all employees at every level have a complete and good understating regarding the policy on the biosecurity programme. It is suggested to make checklists and ensure that training is on-going, even when times are good and no diseases are present.

A biosecurity programme should be applied with the same intensity to all sectors of a company, and it must be practical and easily understood by everyone. Complicated biosecurity programmes, which are not easy to implement, will fail. Consistency in following a set of rules throughout the year (i.e. production cycle) is very important. Implementation of such a programme comes at a small cost when compared to the costs associated with a disease outbreak. Biosecurity is a necessary expense and can make a difference between success and failure in a poultry operation.

Avian influenza has caused problems for birds and, in rare instances, humans. The disease is being found in more regions around the globe and is even endemic in the poultry industries in several countries. Outbreaks of avian influenza over the past 10 years indicate that current levels of biosecurity in different parts of the world are inadequate to limit dissemination of this disease.

Infectious bursal disease (IBD) continues to be one of the most important diseases of poultry, with high rates of morbidity and mortality. This disease can be controlled by routine vaccination and a solid biosecurity programme. Inadequate control programmes, including biosecurity measures, will not only increase the risk of IBD but also open the door to many other diseases, such as Marek’s disease. Newcastle disease continues to be a major problem in different parts of the world. Protection of flocks requires a solid biosecurity and vaccination programme. Infectious bronchitis virus (IBV) has emerged in many intensive broiler and egg production regions, causing respiratory infections in broilers, decreased egg production and degraded shell quality in breeders and commercial layer flocks.

In commercial integrations, poultry diseases occur separately or in combination with other infectious agents and management problems. Immunosuppressive infections with agents such as IBD, chicken infectious anaemia and Marek’s disease predispose flocks to the effects of respiratory viruses such infectious bronchitis, Newcastle disease and infectious laryngotracheitis. Opportunistic bacteria including virulent E. coli, often complicate these infections. The fight against these agents will be an on-going effort and biosecurity measures must be the first line of defence in this battle. In spite of strict control measures, no one can guarantee that everything will always go as planned. It really doesn’t matter how comprehensive your biosecurity measures are on paper but more importantly if the programme is implemented correctly on farms. It is often said that a comprehensive biosecurity programme that is properly implemented, will not eliminate the possibility of disease, but will reduce the probability. When a disease outbreak occurs, this generally indicates that there has been a breakdown in the programme’s implementation. As the industry continues to develop and become even more competitive, it is clear that a solid biosecurity programme is essential for a company to survive and remain profitable in the poultry business.