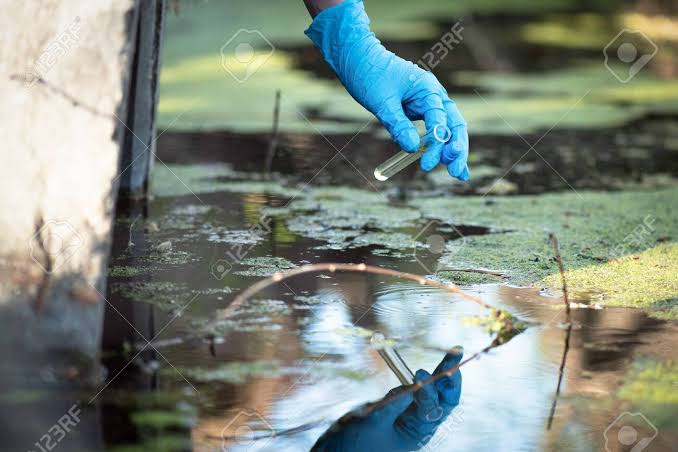 Dissolved oxygen (DO) is one of the most important parameters in aquaculture. Maintaining good levels of DO in the water is essential for successful production since oxygen (O2) has a direct influence on feed intake, disease resistance and metabolism. A sub-optimal level is very stressful for fish and shrimp. It is therefore important to keep DO at optimum levels of above 4.0 ppm.

The dynamic oxygen cycle of ponds fluctuates throughout the day due to phytoplankton photosynthesis and respiration.

As shown in Figure 1 maximum DO will occur in the late afternoon due to the buildup of O2 during the day through photosynthesis. As phytoplankton (microscopic algae) usually consumes the most O2 and since photosynthesis does not occur during the night, DO levels decline. Critically low DO occurs in ponds specifically when algal blooms crash. The subsequent bacterial decomposition of the dead algae cells demands a lot of oxygen. Managing the equilibrium of photosynthesis and respiration as well as the algae growth – is an important task in the daily work of a farmer.

When feeding the fish and shrimp, oxygen demand is higher due to increased energy expenditure (also known as specific dynamic action). To face this higher oxygen demand, several measures can be taken

Other sources of oxygen than photosynthesis are diffusion or transfer from air to water. Wave action or mechanical aeration is forcing this oxygen diffusion. Paddlewheel aerators accomplish this by breaking water into small droplets and increasing contact of water surface with air. Aspirator aerators compel air into the water through a venture and a propeller. Another reason for aeration is the circulation of aerated water through the pond.

BOD5 is an important water quality variable that may be required to demonstrate compliance with water quality permits issued by the governments and to achieve farm certification.

The BOD5 of pond aquaculture effluents usually ranges from 5 to 20 mg/l. The greater the BOD, the more rapidly oxygen is depleted.

Temperature is another important water quality parameter. It can affect fish and shrimp metabolism, feeding rates and the degree of ammonia toxicity. Temperature also has a direct impact on biota respiration (O2 consumption) rates and influences the solubility of O2 (warmer water holds less O2 than cooler water).

Temperature cannot obviously be controlled in a pond. Aquatic animals modify their body temperature to the environment and are sensitive to rapid temperature variations. For each species, there is a range of temperature conditions. It is therefore important to adapt fish and shrimp progressively when transferring them from tank to pond.

Also, the O2 cycle and thus, the DO levels can be affected by changes in the environment; a cloudy day will diminish the photosynthetic O2 input to DO. Correspondingly, uncommonly high temperatures will decrease the solubility of O2 in water and hence lower DO. When a pond is in equilibrium DO will not change drastically.

Carbon dioxide (CO2) in ponds is primarily produced through respiration by fish/shrimp and the microscopic plants and animals that constitute the pond biota.

Carbon dioxide levels (and toxicity) are highest when DO levels are lowest. Thus, dawn is a critical time for monitoring DO and CO2. High CO2 concentrations inhibit the ability of fish and shrimp to extract O2 from the water, reducing the tolerance to low O2 conditions and inducing stress comparable to suffocation.

An increase in CO2 may also decrease the pH, which can lead to toxicity of nitrite. If plants in the water absorb too much CO2 for photosynthesis during the day, the pH will increase, and the fish and shrimp are subjected to higher un-ionized toxic ammonia (NH3) concentrations.

Carbon dioxide concentrations above 60 ppm may be lethal. In an emergency, CO2 can be removed by adding liming agents such as quicklime, hydrated lime or sodium carbonate to the pond water.

pH is a measure of acidity (hydrogen ions) or alkalinity of the water. It is important to maintain a stable pH at a safe range because it affects the metabolism and other physiological processes of culture organisms. It can create stress, enhance the susceptibility to disease, lower the production levels and cause poor growth and even death. Signs of sub-optimal pH are besides others increased mucus on the gill surfaces of fish, unusual swimming behavior, fin fray, harm to the eye lens as well as poor phytoplankton and zooplankton growth. Optimal pH levels in the pond should be in the range of 7.5 8.5.

The CO2 concentration in the water also influences the pH, e. g. an increase in CO2 decreases the pH, as already mentioned above. As phytoplankton in the water utilizes CO2 for photosynthesis, the pH will vary naturally throughout daylight hours. pH is generally lowest at sunrise (due to respiration and release of CO2 during the night) and highest in the afternoon when algae utilization of CO2 is at its greatest. Waters of moderate alkalinity are more buffered and there is a lesser degree of pH variation.

Ammonia in water exists in two forms, as ammonium ions (NH4+), which are nontoxic, and as the un-ionized toxic ammonia (NH3). The relative proportion of the one or the other depends on water temperature and pH. If the phytoplankton absorbs too much CO2 during the day, and therefore increase the pH to a value above 8.5, the fish and shrimp are subjected, depending on the total ammonia nitrogen concentration, to high ammonia concentrations (NH3). As little as 0.6 ppm (mg/l) free ammonia (NH3) can be toxic to many kinds of fish and shrimp, causing gill irritation and respiratory problems.

Nitrite (NO2-) is another form of nitrogenous compound that results from feeding and can be toxic to shrimp and fish. Nitrite is an intermediate product of the transformation of ammonia into nitrate by bacterial activity. The absorbed nitrites from the gut bind to hemoglobin and reduce its ability to carry oxygen.

An increase in CO2 may decrease the pH to a value below 6.5, which can lead to toxicity of nitrite through the formation of nitrous acid (HNO2). At 2 ppm (mg/l) and above, nitrites are toxic (injurious or lethal) to many fish and shrimp.

Hydrogen sulfide (H2S), a colorless, toxic gas, is a by-product of the deterioration of organic matter, usually under anaerobic conditions. Anaerobic soils with moderate to high organic concentrations can be a significant source of H2S, which is toxic to shrimp and fish even at low concentrations since it hinders their respiration. If the bottom soil becomes black and a rotten egg odor is recognized when sediment is disturbed, it indicates anaerobic conditions and the presence of H2S. Hydrogen sulfide is highly toxic in the unionized form (comparable to ammonia). However, the unionized form is predominant at low pH (< 8) and high temperature. At pH 7.5 approximately 14 % of the sulfide is in the toxic H2S form and at pH 6.5 about 61 %. Therefore, sulfide concentrations should be below 0.002 ppm.

Many marine species live in close proximity to sediments that often contain H2S. Some even live in them. From the data in Table 3 it is clear, that the range of susceptibility to H2S poisoning is huge.

Alkalinity is the buffering capacitiy of water and represents its amount of carbonates and bicarbonates. Alkalinity can affect the potential for primary productivity and also the water pH. In case the water pH fluctuates greatly during the day, lime can be used to increase alkalinity in the water to stabilize the water pH. Values of 50 100 mg/l are considered moderate and are recommended. Total alkalinity has been traditionally expressed as milligrams per liter (ppm) of equivalent calcium carbonate (CaCO3). Generally, alkalinity varies from site to site. In the seawater, alkalinity is normally higher than 100 ppm but in freshwater areas, alkalinity is often low, particularly during the rainy season. Low alkalinity in freshwater or in low salinity areas will affect the survival rate and molting of shrimp.

Hardness refers to the concentration of calcium and magnesium in water.

Hard waters have the ability to buffer the effects of heavy metals such as zinc or copper which are toxic for fish and shrimp. Thus, hardness is a crucial parameter in maintaining good pond balance.

Salinity represents the total concentration of dissolved inorganic ions, or salts, in water. It plays a significant role for the growth of culture organisms through osmoregulation of body minerals from that of the surrounding water. For better survival and growth an optimum range of salinity should be maintained in the pond water. If salinity is too high, fish and shrimp will start to lose water to the environment. Younger shrimp appear to tolerate a wider fluctuation of salinity than the adults. Drastic changes of salinity may also alter the phytoplankton fauna and their population densities and lead to instability of the ecosystem. Lowering the salinity by more than 5 ppt, at each time of water exchange, is not recommended.

Careful monitoring of water quality parameters is important to understand the interactions between parameters and effects on shrimp and fish feeding, their growth and health. Each water parameter alone may not tell much, but several parameters together can reveal dynamic processes taking place in the pond. Water quality records will allow farmers to note changes and make decisions fast so that corrective actions can be taken quickly.

Previous articleElectrolytes for Chickens: Keep Your Flock Hydrated and Healthy in Summer
Next articleHow to Get Rid of Chicken Mite: Identification, Symptoms and Treatment