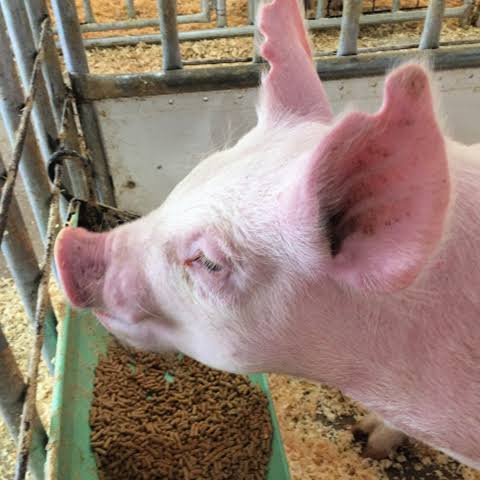 How to Feed & Manage Swine

Not all farm animals are created equal. Swine are quite different in many ways from cows or goats. This lesson explains how some of them are raised, how they differ from other farm animals, and some important nutritional considerations.

Swine is a word that commonly refers to pigs, the animals that we raise to produce food products such as pork. There are many varieties of swine, and they are raised to both generate food and function as pets. This lesson will focus on the fundamentals of the swine industry and the pigs themselves.

The size of swine operations varies widely, even in the U.S. A large proportion of swine operations have less than 100 animals, while only a small percentage of growers raise thousands of swine at a time. The way these operations run also varies greatly. Some allow pigs to run freely, in a semi-wild ‘nature’ with open expanses. The pigs are largely left alone and only rounded up for things like medical treatments or slaughter. Such operations tend to be on the smaller side.

Large-scale operations tend to house swine in small areas of land or in large buildings where they are confined to very small pens; sometimes, the pigs are only able to stand up or sit down, confined in a space too small to allow the pigs to turn around. They are fed, given water, medicated, and brought to market as quickly and efficiently as possible.

Swine are omnivores. This means they will eat either plants or animals. Unlike many other farm animals, they have a simple stomach. So, unlike a cow, which has four main compartments in the stomach, a pig has just one, like a person or a dog does. The technical term for this is monogastric, meaning they have one stomach. The stomach of a typical pig has a capacity of roughly 2 gallons. Pigs begin the digestion of proteins in their stomach and fat digestion in the small intestine. It takes about 24 hours for swine to empty their stomachs.

Most swine diets are composed of corn, barley, wheat, oats, sorghum, or a combination thereof. Grains that are provided for swine to eat should not be too finely ground as finely ground grain can cause digestive problem in swine. An intermediate particle size is best.

The amount of energy required by any one pig depends on their breed, environment, sex, health status, life stage, and so on. For example, the energy intake needed by a sow (i.e. an adult female pig) is approximately 6,500 calories per day in the first two trimesters of gestation, or pregnancy. However, in the last trimester this would need to be increased to about 9,500 calories per day. These numbers will vary based on other factors, such as temperature.

During lactation (the production of milk) sows need more protein than normal in their diet. Nursing piglets may need supplemental iron to prevent them from developing anemia, a condition where there is an inadequate number of red blood cells. With vitamins and minerals, it’s important to keep the calcium and phosphorus balance at 1:1 to 2:1. If this ratio is off, problems such as skeletal fractures may arise.

These are just a few of the many nutritional factors that must be taken into consideration when feeding swine and keeping their unique biological needs in balance.

From reading the last section, you’ve probably gathered that nutrition is important in swine, especially when it comes to pregnancy. Reproduction is an important topic to swine producers, as inadequate or sickly offspring can seriously hinder an operation’s bottom line.