7 Fish Types for you Fish Farm 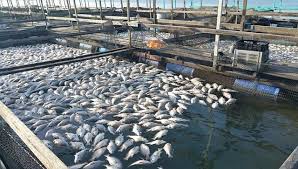 7 Fish Types for you Fish Farm

The biggest running cost element of aquaculture is the high-protein feed that fish demand to grow plump and become marketable. Besides this, one of the structural challenges of fish farming is keeping the culture water clean and free of fish faeces. Biofloc fish farming method strikes both the concerns with one single blow, with its cyclical mechanism of converting fish excreta into feed, keeping culture water clean and nutritious. Let us look at some fish that adapt best to the biofloc method and give high quality yield in the BFT environment for you biofloc fish farm.

Tilapia is one of the herbivorous fish varieties that is one of the best adapted species to the BFT system. Tilapia biomass can reach up to 200-300 mt/ha in a well-managed BFT tank. It is popular in the market owing to it’s fleshy nature which is easy to cook, mild in taste with no strong odour, and comes at affordable prices.

It has been farmed in separate tanks and ponds world-wide due to it having the tendency to be an invasive variety. Therefore, a biofloc fish farm is the best suited infrastructure for this kind of fish.

One of the most vastly identifiable varieties of fish worldwide is salmon, with its large size, fleshy quality and iconic orange flesh with white vein-like pattern. An adult salmon can weigh around 4 to 5 kgs, while a king salmon can go anywhere around 10 kgs or even more. Typically, salmon are anadromous: they hatch in fresh water, migrate to the ocean, then return to fresh water to reproduce. However, populations of several species are restricted to fresh water throughout their lives, making them an ideal candidate for a biofloc fish farm environment.

Consumption of Indian salmon, or Rawas is known to promote a healthy metabolic activity in human beings and a high protein content (i.e., anywhere between 20 to 30 gm per 100 gm fillet) makes it an extremely nutritious element in the balanced diet of Indians. While it is naturally found along the west coast, the aquaculture adoption of salmon has made it more affordable and readily available throughout the Indian subcontinent.

Shrimp is essentially smaller than prawns, yet similar in appearance and flavour. Both of these belong to the crustacean family – while shrimp is found in the salty seawater, prawns are found in brackish waters that are somewhat salty or even freshwater. Irrespective, both these varieties are adaptable to the Biofloc fish tank environment.

The major function of BFT in crustacean farming is to reduce the nitrogenous metabolic waste (like ammonia and nitrites) produced by shrimp feeding and production. Ammonia consumed by heterotrophic bacteria and it is then converted to protein, which can then be consumed by the crustaceans.

While illegal to farm in some parts of the country due to its invasive nature which may pose danger to the biodiversity of the region, catfish still remains a popular fish variety, both in terms of production and consumption. It has a reputation to be an ugly fish but it is rich in healthy fats and protein, making it a delicacy in many cuisines across India, especially in the eastern part of the country.

However, this fish demands utmost care and precision in farming. This is because the sting of some of the subspecies of this fish is venomous and can lead to health complications in human beings if not farmed right. These complications include hypertension, cardiac arrest, neuromuscular blockage and respiratory failures.

Carp is a fleshy freshwater fish that is originally attributed to Europe and Asia. This river fish is well adapted to the biofloc fish farming setup and is an omnivorous species, well-adjusted to a plethora of feed options. The best growth is obtained in this variety when the water temperature is maintained 23 °C and 30 °C. These fish can stand cold winter periods and salinity up to 5%. The optimal pH range that is required for this fish to thrive is anywhere between 6.5-9.0. These fish are known to be robust and can survive low oxygen concentration (0.3-0.5 mg/litre) as well as supersaturation.

Trout belongs essentially to the salmon family, and is predominantly a freshwater species. Trout can be seen to have a tremendous range of colours which changes from region to region, as this fish has certain camouflaging abilities, which makes it adapt to its environment, surrounding and habitat. Trout naturally feeds on other smaller fish and invertebrate aquatic life, and can also be grown in tanks within BFT systems. A 100 gm fillet of this fish has over 18 gm of protein, making it an affordable source of healthy fats and other nutrients, thereby making it popular among consumers.

The term bass encompasses both marine and freshwater varieties, and in this family, one of the most famous species is the marine Seabass, which is well-admired by patrons around the globe. Its freshwater counterpart is a suitable species for growing in a BFT set-up and gives high yields in controlled environments. There are over 400 recognized varieties of bass, and on an average, a 100gm fillet of bass has over 23 gm of protein and many other nutrients, making it popular in the consumer market. It is called Kalanchi in Kerala and Basa across India, and seems to be popular both in its marine and freshwater form.