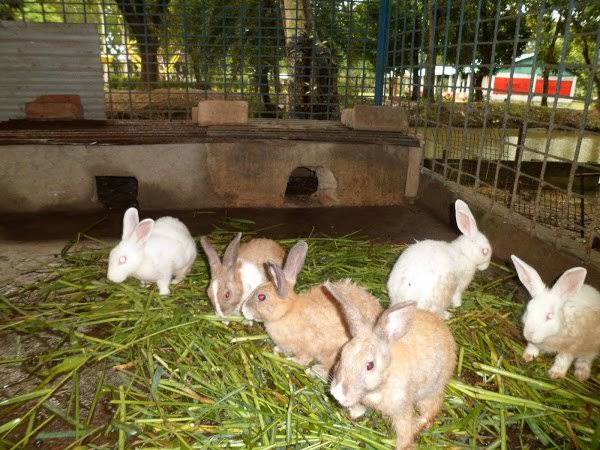 Habit and Habitat of Rabbit:

Oryctolagus cuniculus (European grey rabbit) is worldwide (cosmopolitan) in distribution. Originally it belonged to Western Europe and Africa, but later on it was carried by men to various parts of the world including India. It was wild and from it various domestic varieties have been developed, which differ in colour, size and for texture. Oryctolagus cuniculus or the Rabbit is usually found in the fields, grass lands and open wood lands.

It leads a fossorial life, i.e., lives in burrows, which it digs into the ground with the help of its clawed forelimbs. The burrows are in the form of spacious branched tunnels, which open in various directions. These burrows are known as warrens. The burrows are usually used by the rabbits for retiring or at the approach of danger and to rear their offsprings.

The rabbits are nocturnal (crepuscular) in habit, usually feed in twilight at dawn or dusk and they feed on green vegetation (herbivorous), usually near their warren. They are coprophagous, i.e., eat their soft night droppings without mastication.

The rabbits are gregarious in habit, i.e., they live in groups and even several families consisting of hundreds of rabbits may live in one burrow. They are defenceless but clever and agile and fast runners, and cover nearly 32 – 40 km in an hour. The average life span of a rabbit is seven to eight years. A rabbit breeds nearly four times a year.

A rabbit gives nearly five to eight young ones in each litter or breed which become sexually mature in 4 to 6 months. The young ones when born are blind, deaf, naked (without hairs) and helpless. Later on when mother starts feeding the young ones on her milk, they grow, their eyes and ears are opened, hairs develop on the body and they become mature. Thus, parental care is shown by the female rabbit. The rabbits are polygamous, i.e., one male lives in the company of many females.

The rabbits are cosmopolitan in distribution but their original home was Western Europe and Africa, from where they spread or were carried by men to various parts of the world. They are not found widely in the wild state in India but their domesticated varieties are common in all parts.

The natural enemies of rabbits are men, snakes, fox, wolf, jackal, wild cats, owls and other preying birds. They are without organs of defence but they are clever enough to hide in the burrows on seeing the enemies.

The rabbits are of great economic importance to the mankind because they are both useful and harmful. Their enemies are snakes (pythons), owl, hawks, buzzards (predatory birds) and mammals such as foxes, wolves, cats, etc. Man uses its for the manufacture of purses, gloves, caps, etc. Their meat is palatable which is very delicious. The rabbits are also used for various biological researches in the hospitals and educational institutions.

They are pet animals and are domesticated for entertainment. The rabbits are harmful as they damage crops, vegetables and the grass of the lawns. They also befoul the grass of the lawns and pastures with their excreta. Consequently sheep and other animals grazing on these places do not like to eat the grass. Rabbits also carry germs of some human diseases.

The rabbits are defenceless and have several enemies, even then they are well suited to protect themselves from their enemies due to several adaptations found in them.

Some of the important adaptations are:

1. They are fast runners and always remain alert.

2. The protective colouration and burrowing mode of life.

3. The sense organs of smell and hearing are keen.

4. They possess a wide range of vision.

5. They can easily live in the different environmental conditions.

6. They possess 13 pairs of ribs which facilitate respiration during fast running.

7. The fecundity of reproduction is very high.

8. The mother cares the young ones, etc