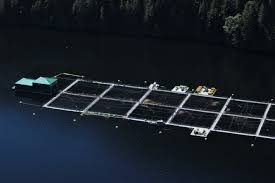 Aquaculture is the world’s fastest growing seafood sector, likely to overtake all other methods of seafood production within a few years time. It has been hailed as both the saviour and the ruin of the oceans. So which is right? Different methods of aquaculture have different impacts on the environment, so it is worth knowing how your seafood was farmed. Here is a look at some of the most common methods of Aquaculture employed in Australia today and their pros and cons. Also check out the Fishing Techniques page, to learn how wild fish are caught.

Open sea-cage aquaculture refers to the rearing of aquatic species, within enclosures in natural waterways. Open systems are being implemented in a wide range of environments including freshwater rivers, brackish estuaries and coastal marine regions. Floating mesh cages are anchored to the seafloor and vary in size depending on the scale of operation and the species cultured.

Juvenile stock is sourced either from hatcheries or wild populations, and grown out in pens until a marketable size has been reached. Finfish grown in open systems are primarily carnivorous species which are fed on a diet of fishmeal (pellets comprising small schooling fish species). Some rapidly developing open systems in Australia include yellowtail kingfish, southern bluefin tuna, Atlantic salmon, trout and barramundi.

There are numerous concerns associated with the expansion of open sea-cage aquaculture. One of the primary objections relates to the requirement of fishmeal to feed carnivorous species. In some cases the conversion ratio may be in the order of more than 5kg of fishmeal to produce just 1kg of marketable fish. Other significant issues include increased disease and parasite transmission due to high fish densities, the risk of escape and interbreeding with wild populations, and reduced water quality resulting from the accumulation of faecal waste.

The culture of numerous shellfish species is carried out in systems open to natural waterways. Larval stages may be collected from the wild or produced in hatcheries. These are then placed into the water column by methods including attachment to sticks or ropes, or containment in cages. The main species cultured with these methods are mussels and oysters. As these species are filter-feeders, they are capable of extracting nutritional requirements from the water column, with no fishmeal being added.

The farming of mussels, oysters and other filter feeders can be considered sustainable methods of aquaculture. There is minimal impact on marine habitats or water quality provided water flow is sufficient. The discarding of sticks and racks may be a concern in some areas.

Semi-closed aquaculture refers to the land-based production of a species, in which water is exchanged between the farm and a natural waterway. Waste water is released from the ponds into the local waterway, whilst the farm is replenished with fresh water pumped back into the system. Prawn farming is the predominant form of semi-closed aquaculture, also representing the most extensive use of pond systems in Australia.

The black tiger prawn is the primary species being farmed in Australia, whilst banana, kuruma and brown tiger prawns are also being produced for the seafood industry. Vannamei prawns imported from Southeast Asia are becoming increasingly available as a low-cost alternative in Australian markets.

Semi-closed aquaculture operations can have large-scale effects on coastal ecosystems. As ponds require continual water exchange, they are often located adjacent to waterways, where coastal wetlands and mangroves are reclaimed for development. The result can be a vast loss of habitat which is critical for the juvenile stage of many species. Constant outflow of water may also reduce surrounding water quality if not treated adequately. Prawns are supplemented with fishmeal (pellets comprising small schooling fish species) at conversion ratios generally between 1-3kg of feed to 1kg of prawns, placing continued demand on wild fish stocks.

Closed system aquaculture refers to the land-based rearing of aquatic species in raceways, tanks and ponds. Recirculation technology is implemented which cycles water through filtration processes and returns it back into the aquaculture system. This process aids in maintaining water quality whilst ensuring minimal exchange with natural waterways.

Closed aquaculture systems are primarily used for freshwater species with silver perch, barramundi, yabbies and marron amongst the most common marketable species in Australia. Blacklip and greenlip abalone are the main marine species produced in closed systems, and are experiencing rapid growth due to demand from Asian markets.

Closed system aquaculture is considered one of the more environmentally benign methods of rearing aquatic species. Fishmeal (pellets comprising small schooling fish species) may be added to feed carnivorous aquaculture species, and is a concern as it places continued demand on wild fish stocks. However, there is negligible interference with waterways as a result of tight control over waste water and the prevention of fish escape.