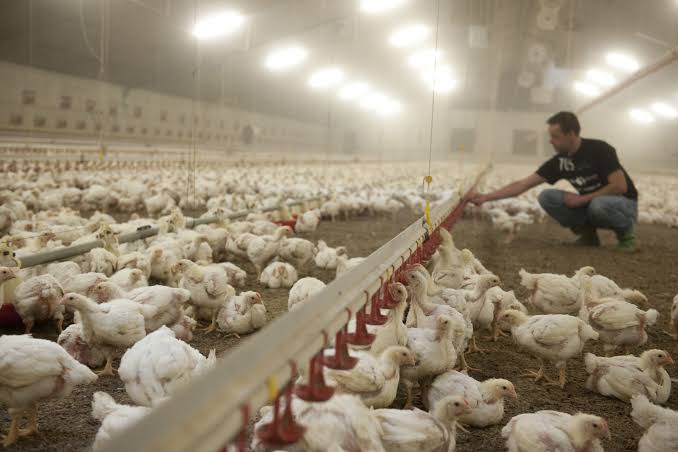 There are many factors influencing broiler production parameters, health and economics of a flock. A clear focus on the basic management factors can limit negative production responses in an early stage, improving overall profitability.

With high stocking density (30-above Kg/m2), there will be corresponding increases in temperature, humidity, CO2, and ammonia levels, which lead to various respiratory diseases and other infections. Growth performance will also be reduced not only because of the reduced feed intake under such disease conditions, but also because of the loss of feed energy in immunological responses and in other body adjustments.

In addition to this, high stocking density increases the degree of litter caking and hence reduces the chance for dust bathing behaviour which allows birds to keep their feathers clean and free of parasites.

In order to alleviate the effects of high stocking density, proper ventilation and cooling systems should first be provided to reduce the temperature, CO2, and ammonia which affect growth and health performance. A further advantage is that the stocking density can be increased from 10-12 birds/m2 to 15-17 birds/m2, thereby increasing the total capacity of the farm by about 30% with no detrimental effects on performance. From the economical standpoint, the increased farm capacity with ventilation/ cooling systems would cost only 40% of the funds needed to establish a new poultry house.

The poultry keeper should in all cases allow his birds to move approximately 3-5 times per day within the house area. He can simply do this by walking slowly along the periphery of the walls of the house where most of the birds concentrate. This practice helps to reduce leg and breast problems associated with high stocking density. It is further recommended that the depth of litter should not exceed the level mentioned earlier. This will allow birds to dust bathe more frequently and to dig down the underlying floor, and hence free their bodies from dirt and/or parasites.

Read also: Fermented Feed and Its Benefits to Chickens

The intensification of poultry farming has exerted a great influence on energy reserves in many parts of the world. This has forced attempts to look for alternative energy sources, such as solar power, to help solve the energy problem and meet the requirements of the farm. Solar heating systems can be complicated, but the basic components that could be employed for poultry houses aren’t rocket science (Figure 1). Simply, the sun’s rays can be collected in a rock wall, which has a high thermal capacity to store heat for a period of time. Heat is then transferred to the house through the duct system in a controlled amount to meet the heat requirement of the birds.

Data on the most important biological performance parameters for solar and conventional heating are shown in Table 1. They represent the average performance of 32 flocks of broiler chickens. Livability of the flocks was the same for both methods of heating but live weight and feed conversion were better by 4.7 and 1.9%, respectively, in the solar powered house. In addition, considerable savings can be made in fuel consumption – up to 77% in winter and 71% in summer.

It is, however, inappropriate to evaluate a solar energy system only on bird performance and fuel consumption. Rather, it is more meaningful to compare the benefits of the system against its cost, and then determine whether it would increase profitability. Currently, the benefits obtained from solar power do not justify the high costs of adopting such a system but the situation will vary from one country to another and over time, depending on the tariff for conventional energy, interest rates and the cost of the solar heating system.

Light should be distributed evenly in the chicken houses. The use of light reflectors helps save power and electricity. It has been estimated that a 25 watt bulb with a reflector could provide the same amount of light as a 40 watt bulb without a reflector. An alternative approach is to clean the bulbs regularly. Light intensity increases by up to 100% or more when light bulbs are clean.

Light is usually provided in broiler units for periods of 23-24 hours per day. It is assumed that long exposure to light encourages feed intake, hence allowing the birds to achieve the target weight in the shortest time. Recent studies have examined an alternate lighting system in which the birds are exposed to one hour of light followed by three hours of darkness, with the cycle being repeated 6 times a day.

Amino acid concentration in the diet is a prime nutritional factor affecting performance. Deficiencies of limiting amino acids such as lysine, methionine and cysteine in a diet adversely affect growth and feed efficiency.

The energy density of the diet is also an important factor in feed utilisation. Bodyweight may not be affected much by the energy level, but there is a reduced feed efficiency associated with lower energy density. As the energy level in a feed declines, feed consumption increases to maintain equal levels of energy intake.

Mould growth on feed ingredients is a substantial hazard in poultry production. Moulds significantly decrease bodyweight and also have negative effects on carcass quality as they increase the relative weights of liver, heart, kidney and proventriculus. These problems are most prevalent in feeds that are not appropriately processed. They are also prevalent in tropical regions where hot-humid climate favours the growth of mould on feeds. Addition of sodium calcium alumino-silicate to diets of broilers at a level of 0.5% has proved to be a useful way of solving these problems. The product forms a stable complex with different genera of moulds, thus reducing their bioavailability for gastrointestinal absorption. The sodium calcium alumino-silicate has been approved recently in the USA as a safe product, and the treated animals may not need a withdrawal period before slaughter.

The noise intensity associated with any power source in a farm is best measured in decibels (dB) using a sonometer. Shown in Table 4 are the permissible noise levels and the duration of exposure. Should the birds be exposed to higher levels of noise, or for a period of time beyond these recommendations, then a number of production problems can be expected.

Impact of noise on a chicken’s weight gain

Digestibility results are also shown in Table 5. Digestibility values of DM and protein were similar among the two treatments, but fat digestibility was reduced in the high-noise group. This may have been an additional factor in reducing weight gain of the chickens.

It has also been reported that production of glucocorticoids is elevated by excessive noise. This should give rise to a rapid breakdown of glycogen in the muscle cells, leading to a decline in pH and a delay in the temperature drop after slaughter. Both of these factors are responsible for pale, soft, oxidative (PSE) meat.

Furthermore, reproductive hormones, such as estrogen and progesterone, have been found to respond adversely to noise stress. This effect has not yet been observed for poultry, but is commonly reported in horse and cattle.

The distances between the chicken houses and the source of the noise should be given a prime consideration. As indicated earlier, the farther the distance the less noise stress and the better performance. However, in small farms where the land area is a limiting factor, alleviating the noise stress by means of increasing the said distance may not be a practical approach. Installation of resonators or exterior application of noise baffles may be considered in such a case. Also, consultation with a qualified acoustical engineer can lead to specific solutions for most noise problems.

It is first recommended that houses should be sited in areas isolated from other poultry units, and be protected against entry of wild birds or stray animals. As soon as the flock has been depleted, the manure and the feed must be removed from the farm. The houses and equipment should then be cleaned and thoroughly disinfected. Ammoniac compounds may only be used when coccidian infections are likely to persist.

Vaccination programmes depend on a number of factors such as the diseases prevalent, availability of the vaccine, labour cost, etc. Therefore, it may not be possible to generalise a vaccination programme for all production circumstances. In any case, however, birds to be vaccinated should be in a good health condition. They should also be withheld without feed or water for some time before vaccination. This helps to ensure an adequate consumption of the vaccine when administered via either medium.

The use of antibiotics or other drugs should be kept to the minimum level. This is to avoid resistance development in bacterial strains and to prevent contamination of poultry products with residual drugs.

In many cases, it is not uncommon to see farmers explaining their problems and trying to get the prescription through phone calls with the veterinarians. This cannot be an effective way of diagnosis and treatment of diseases, and the savings obtained here would not justify the losses resulting from such improper communication of veterinarians.