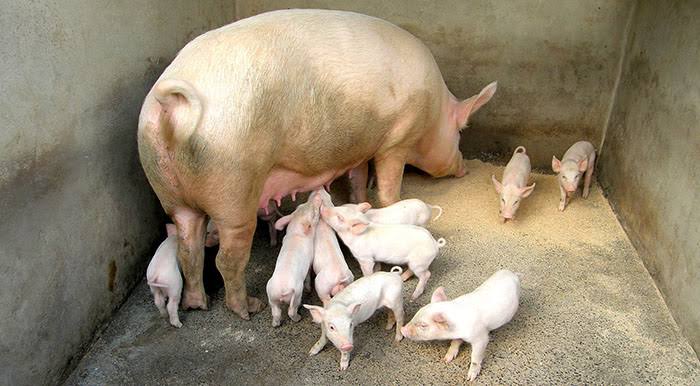 A pig’s eyes are bigger and more functional than people often think. The eye of a pig is about 24mm in diameter, similar to a human’s eye. The total optical power of the pig eye is estimated to be 78 dioptres, which is greater than the optical power of humans at 60 dioptres. So, pigs are likely nearsighted compared to humans. Pigs have approximately 310-degree vision, and the ability to detect colours. The retina of a pig contains two types of cones which are sensitive to blue and green-yellow light. Thus, the pig is believed to have dichromatic colour vision (bluish and yellowish) and can identify blue better than any other colours.

In terms of lighting preferences, pigs prefer well-lit areas to dark areas. So, it is easier to move pigs to a lighter area than a darker area. Pigs also have a very sensitive sense of smell. Sows identify their piglets through smell, and in turn, piglets find their dam and locate teats through olfactory clues. Piglets can recognise their dam’s faeces by seven days of age. In a group, pigs can recognise pen-mates and dominant individuals mainly using olfactory cues. The strong sense of smell in pigs has been used in swine production, such as using an odour-masking agent to suppress aggression among pigs.

Pigs have a sense of taste that is similar to humans, and can discriminate between sweet, sour, salty, and bitter tastes. Pigs prefer sweet to sour taste and will reject bitter food. Sweet, meaty, and cheesy are the preferred flavors to pigs. Sweetener additives can be used to encourage newly weaned piglets to consume solid feed5,6.

The hearing range of pigs is also similar to humans but with greater sensitivity in the ultrasonic range. Pigs frequently use audio cues to communicate with each other. Sows emit a series of grunts, varying in frequency, tone and magnitude to call their piglets and indicate imminent let-down of milk7,8. Lactating sows also respond to alarm calls of piglets. Loud, sudden noises can stress pigs and interfere with the farrowing process. Playing recorded nursing grunts to sows can stimulate and synchronise nursing in a room.

For example, free-ranged pigs spent 35 to 55 per cent of their time foraging for food, while indoor housed pigs do not forage because food is readily available. The benefit and impact of performing the full spectrum of natural behaviours is not the focus of this article; in this article, the author discusses behaviours in pigs for indoor commercial production in order to help pork producers improve animal care by applying behavioural knowledge.

On average, sows spend two to four hours giving birth to a litter, with an interval of 15 to 20 minutes between each piglet. However, there is large variation in farrowing duration (45 minutes to 12 hours) and inter-birth intervals (five to 85 minutes) among individual sows12,13. During farrowing, sows spend 85 per cent of their time lying on their side.

At birth, piglets can present normally in either a ‘nose first’ or ‘hind legs first’ position. ‘Broadside on’ is considered a malpresentation. Piglets can get on their feet within a few minutes and successfully suckle milk within 45 minutes after birth.

Birth order may affect piglet survival and growth. Later-born piglets usually have less vigour, suckle later, obtain less colostrum and have poor teat order compared to piglets born earlier. In addition, later-born piglets have a high risk of being stillborn or being born enveloped in afterbirth.

Nursing tends to be continuous at farrowing, and later becomes rhythmic7,8. A sow nurses her piglets approximately once per hour. Nursing is usually synchronized among sows in the same room, meaning that sows within a room usually nurse at approximately the same time. Each nursing takes about three minutes but the actual time of milk letdown only lasts 20 to 30 seconds. On average, each piglet obtains about 0.7oz (20ml) of milk at each nursing.

Pigs spend the majority of their time resting or lying. On average, grow-finish pigs spend 75 to 85 per cent of their time lying, and five to 10 per cent eating, with the remainder of their time involving in other activities such as walking, sitting, rooting/nosing and drinking. Within the thermal comfort zone (i.e. the temperature range when pigs spent the least energy to maintain their body temperatures), lying on their side (lateral lying) is the predominant posture, with about 40 to 50 per cent of pigs touching each other.

When temperatures are below the comfort zone, pigs adopt a sternal lying posture (on their chest and stomach) and huddle together to reduce the exposed skin surface area for heat loss. Under very cold conditions, pigs may lie on top of each other to keep warm.

Above the upper limit of the thermal comfort zone, pigs change their lying position from sternal to lateral with legs, stretching out and avoid contact with other pigs. Under extremely hot conditions, pigs increase their respiratory rate (panting) to dissipate heat through evaporation from the respiratory tract.

Increasing the length of the light period can also increase the number of meals and diminish the diurnal variation in eating behaviour in pigs. Eating behaviour can be socially facilitated. When a hungry pig is eating adjacent to a satiated pig, the satiated pig typically starts eating. Furthermore, pigs in adjacent pens tend to eat at the same time. However, when feeders are close together without protective dividers, pigs will avoid eating together and are aggressive towards other pigs that are eating next to them.

Pigs learn what to eat and where to eat from other pigs. Pigs that have observed other pigs eating a novel diet are more likely to eat the novel diet than pigs that have not. In addition, pigs that have observed other pigs eating from one of three feeder troughs will eat from the same feeder if given a choice. Within the thermal comfort zone, drinking behaviour usually occurs within 10 minutes of eating, hence the number of times per day that a pig drinks is similar to the number of eating events.

Grow-finish pigs usually spend 20 to 30 minutes drinking per day, with 15 to 30 seconds for each drink. Under conditions of heat stress, however, pigs spend more time drinking as well as playing with the drinker. Pigs with diarrhea will also consume more water. Thus, excessive water consumption can be used as an animal based welfare measure to monitor the thermal comfort and health status of pigs.

Pigs like to excrete in cool and wet areas, and lie in warm and dry areas. Pigs often drink, urinate, and defecate in close proximity of each other.

Because pigs take an unstable stance when they are excreting, they tend to excrete in a place that is away from commotion, and most commonly in a corner or against a wall. In most pens, the majority of the commotion is near the feeding areas so pigs tend to excrete away from feeders. If water is spilled, the pigs lie away from that area and then use it as an excretory area. So, pigs usually create the dunging area near drinkers.

Pigs also like to excrete along the opening partitions between pens due to either draughts or the natural marking behaviour when they see other pigs in the next pen. Both higher room temperatures and a higher stocking density can cause pigs to foul the pen.

Belly-nosing has been categorized as a stereotypy. Stereotypies are defined as repetitive, non-functional behaviours. Belly-nosing is most often seen in early weaned piglets, and peaks at three to seven days after weaning27,28. It is considered to be caused by stress associated with early weaning. Piglets that are weaned at two weeks of age display two to five times more belly-nosing than piglets that are weaned at four weeks of age.

Oral, nasal, and facial behaviours (ONF) are also considered stereotypic behaviours. Oral, nasal and facial behaviours are most often seen in pregnant sows and can be associated with limit feeding and barren environments32. Gestating sows in stalls may spend 30 per cent of their time performing ONF behaviour. Compared to sows in gestation stalls, group-housed sows have been reported to spend less time engaging in ONF.

However, Daily and McGlong34 did not find differences in ONF performed by sows kept on pastures or indoors in stalls. They argued that ONF maybe natural pre- and post-feeding appetitive and consummatory chewing and rooting activities, and not necessarily indicate poor welfare in sows. Although the motivation and consequence of ONF is still under debate, ONF has been perceived as a behavioural indicator of poor welfare. Feeding sows ad libitum with diets containing high fibre decreases the incidence of ONF in sows housed both in stalls and in pens.

Tail-biting, which is more often observed in grow-finish pigs than in any other production stages, is the most damaging abnormal behaviour in pigs. The incidence of tail-biting in grow-finish pigs with normal tails has been reported to be nine per cent, which is higher than the three per cent reported for tail-docked pigs. Tail-biting is categorised as cannibalism in pigs. Causes of tailing biting are not well understood,but are known to be related to several factors including malnutrition, discomfort,and lack of environmental enrichment38,39. Low-salt diets, draught or high air speed, high ammonia or carbon dioxide concentrations, limited feeder and/or drinker space, and over-crowding have all been reported to be associated with tail biting.

Since tail-biting can be caused by multiple factors, there are no specific solutions to the problem. In practice, victim pigs are usually removed once their tails become injured. Timely removal of both tail biters and victim pigs is important in preventing an outbreak of tail biting in a pen. Once tail biters have tasted blood from the tails of victim pigs, it is hard to stop them from biting more tails because pigs prefer the taste of blood. Continued tail biting becomes rewarding and the frequency of tail biting behaviour will increase.

Read also: How to do organic pig farming- tips and tricks

Behaviours in sick and compromised pigs

Sick and compromised pigs usually display behaviours that are different from healthy animals40.Typical sickness behaviours in swine include reduced feeding, drinking, and interactions with pen mates, and increased resting, huddling,and shivering. Sick pigs are less successful in competing in a group,so these pigs should be moved to a hospital pen and receive individual care.

They rely on olfactory and auditory cues to recognise and communicate with other pigs.

Improper management and environments could cause changes in behavioural patterns, and may induce abnormal behaviours.

Understanding the sensory capabilities and normal behavioural patterns of pigs will help us prevent the occurrence of abnormal behaviours in swine production.

Previous articleOne age, one site- Poultry Biosecurity
Next article3 MAJOR WAYS TO MAINTAIN A HEALTHY CHICKEN THROUGHOUT THE REARING PERIOD