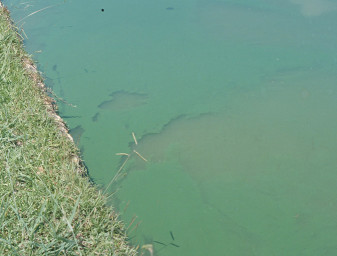 Ponds typically contain an abundance of phytoplankton. These organisms play an important role in pond ecology and influence water quality. Although phytoplankton usually are beneficial, under some conditions, they can be quite problematic in fish and shrimp production.

Phytoplanktonic algae consist of thousands of species distributed primarily among the phyla Pyrrhophyta, Euglenophyta, Chlorophyta, Heterokontophyta and Cyanophyta. The Pyrrhophyta are mainly marine and include the dinoflagellates. The Euglenophyta — like the Pyrrhophyta — are motile, flagellate organisms, but many are freshwater organisms such as species of Euglena. The Chlorophyta are mostly freshwater organisms, and this phylum includes the common green algae. The Heterokontophyta contains many freshwater and marine species and includes the yellow-green, golden and brown algae as well as diatoms. The Cyanophyta are prokaryotic (the cell nucleus is not bound in a membrane) like bacteria, and many authorities consider them to be bacteria (cyanobacteria). But most aquaculturists refer to Cyanophyta as blue-green algae, as I will do. There are many freshwater, but fewer marine species of blue-green algae.

Read also: Probiotics in aquaculture : do they work?

Aquaculture ponds are ideal habitats for phytoplankton: These systems are managed to avoid excessive turbidity from suspended clay particles. If they are acidic, they are limed; nutrients are abundant because of additions of fertilizer and feeds. Phytoplankton are necessary in ponds for several reasons. They are the base of the natural food web that culminates in biomass of the culture species. Even in ponds with feeding, phytoplankton usually are important because natural food organisms supplement manufactured feed — this is particularly important for small postlarval crustaceans and fingerling fish soon after stocking.

Phytoplankton is an important source of dissolved oxygen. In the daytime, these plants produce oxygen by photosynthesis at a much faster rate than oxygen can diffuse from the atmosphere into the pond water. Phytoplankton rapidly removes ammonia nitrogen from the water lessening the concentration of this potentially toxic substance. Finally, turbidity created by phytoplankton restricts light penetration to the pond bottom, and a phytoplankton bloom is a good control measure for aquatic macrophytes that grow below the water surface.

Read also: Fertilizer for fish ponds- Tips for fertilizing fish pond with fish in it

During daytime, high rates of photosynthesis may deplete water of free carbon dioxide leading to excessively high pH. Also, high levels of dissolved oxygen supersaturation may occur when photosynthesis is rapid. Oxygen super-saturation usually does not cause gas bubble trauma in aquatic animals in ponds, because culture animals usually can move to deeper water where the degree of oxygen saturation is lower. However, in ponds used to supply water to hatcheries, gas supersaturation in source water can have adverse effects on eggs or fry.

Off-flavor in fish and shrimp

An abundance of certain species of phytoplankton in ponds can have other adverse effects — notably the production of odorous and toxic compounds. Some phytoplankton — mainly certain blue-green algae — produce the odorous compounds geosmin and methyl-isoborneol (MIB) that can be absorbed by fish and shrimp resulting in a bad odor and taste commonly referred to as off-flavor. Off-flavored fish often are rejected by processors.

Geosmin has an earthy odor reminiscent of freshly-plowed moist soil or of a damp earthen cellar. This compound is produced most commonly by species of Anabaena and Aphanizomenon that often are abundant in freshwater aquaculture ponds. The odor of MIB is musty and medicinal — somewhat like that of camphor. The common source of MIB appears to be species of Planktothrix (formerly called Oscillatoria).

An effective way of avoiding a problem with off-flavor is to occasionally make flavor tests and schedule harvests to coincide with periods when the culture species has an acceptable flavor. Some producers have reported success in preventing off-flavor by stocking species such as Chinese carp and tilapia along with the primary culture species; these planktivorous fish eat blue-green algae and minimize the off-flavor risk. Nevertheless, it sometimes is necessary to treat ponds with copper sulfate to kill off-flavor producing algae. The usual treatment rate for copper sulfate in milligrams per liter is 0.01 times the total alkalinity concentration.

There are many species of toxic algae, and they may be common in eutrophic bays and estuaries where shellfish are cultured and fish are produced in cages. Algal toxins produced by blue-green algae, dinoflagellates, and diatoms in coastal water usually are not toxic to mollusks. Rather they accumulate in the tissue of these organisms and present a health threat to humans who dine upon them. There are several types of shellfish poisoning, and one form, paralytic shellfish poisoning can lead to death in humans. Toxic algae in coastal water also have been reported to cause mortality of fish in cages.

Toxic algae are less common in freshwater water than in coastal water. Nevertheless, there are confirmed instances of toxic algae in freshwater aquaculture ponds that resulted from species of certain genera of blue-green algae (Microcystis, Anabaena, and Planktothrix), Eugleanoids (Euglena), and Haptophytes (Chrysochromulina).

There is no way to effectively prevent the growth in aquaculture ponds of phytoplankton responsible for algae toxins. Managers have sometimes attempted to kill toxic algae by copper sulfate or other algicide application with variable success. There also have been attempts to detoxify algal toxins by application of potassium permanganate. Based on use of potassium permanganate for other purposes, around 2 mg/L would be needed in relatively clear water and up to 6 mg/L may be required in water with a high concentration of organic matter in order to oxidize these compounds. But, there is no assurance that the treatment is generally effective.

Read also: How to Sterilize a fish tank and equipment

In pond management, efforts should be made to avoid excessive phytoplankton blooms by adding no more fertilizer or feed to ponds than necessary. Nevertheless, in feed-based aquaculture, ponds typically develop dense phytoplankton blooms. Phytoplankton blooms often become excessive at feeding rates above 30 kg/ha per day in ponds without aeration. At greater feeding rates it is important to apply sufficient mechanical aeration to avoid low dissolved oxygen concentration at night. Low nighttime dissolved oxygen concentration is no doubt the most serious water quality issue in feed-based pond aquaculture.