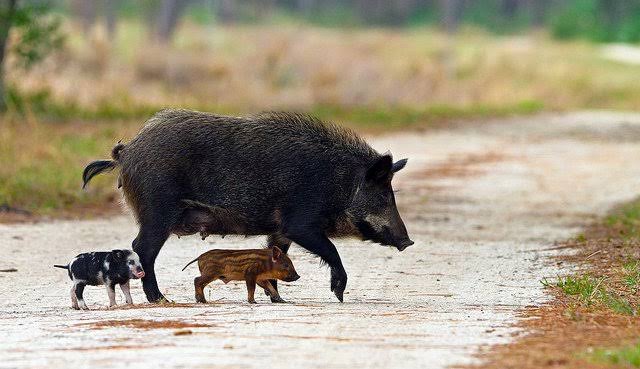 Feral pigs in Australia descend from domestic swine, but look more similar to Eurasia’s wild boar than their domestic counterparts. They tend to have sparse, coarse hair on lean and muscular frames, well-developed necks and shoulders that taper to short hindquarters. Colouration is predominantly black, rust-coloured or black and white spotted. Females are usually smaller and weigh less (50–60 kg) than males (80–100 kg). Pigs have keen senses of smell and taste and good hearing, but their eyesight is generally considered to be poor.

Feral pigs are highly social and intelligent animals that naturally form groups, known as ‘mobs’, or ‘sounders’ in the United States. These groups are usually less than 12 individuals, although they can be as large as 400 if conditions are right. Feral pigs are most active from late afternoon to early morning.

In Australia, feral pigs occupy a diverse range of habitats including rangelands, alpine regions, tropical rainforests, floodplains and wetlands. They are not usually found in Australia’s arid interior as they need regular food, water and shelter, particularly in hotter conditions. Feral pigs tend to stay within defined home ranges, but will move in response to seasonal requirements or regular disturbance. Family groups of sows, piglets and juveniles tend to have more limited home ranges (2–20 sq km) than boars, who are typically solitary and have home ranges of 8–50 sq km.

Feral pigs are opportunistic omnivores that exploit a variety of food sources. They prefer green vegetation, but readily eat a range of animal matter, roots, grains and fruits. Using their muscular mobile snout and forefeet, pigs effectively root up the ground searching for food. Feral pigs have relatively high protein requirements and will eat the eggs of ground-nesting birds, reptiles and amphibians and directly prey upon lambs, frogs and marine and freshwater turtles2,3.

Breeding is heavily influenced by the availability and quality of food. Favourable conditions allow feral pigs to reproduce all year round and at a rapid rate, akin to rabbits. Sows can breed once they reach about 25 kg or six months of age and can potentially produce two litters of 4–10 piglets in a year. Mating is mostly random, which leads to diverse genetic mixing. Tracking studies indicate large boars will disperse widely — up to 150 km — to secure breeding opportunities.

Feral pigs lack sweat glands, so are relatively heat intolerant and need free water and shade to withstand high temperatures. They also need high-energy, protein-rich foods in order to successfully rear their young. Feral pigs are susceptible to toxins such as sodium monofluoroacetate (1080) and the human food preservative sodium nitrite. Such weaknesses in their biology and ecology can be exploited for targeted and cost-effective feral pig management.

Original distribution: It is likely that pigs were domesticated from the Eurasian wild boar 8000 to 10 000 years ago. Wild boar, domestic and feral pigs (all Sus scrofa) occupy the largest range of the modern pig family, Suidae. Originally occurring in Europe, Asia, North Africa and the Malay Archipelago, pigs have now been introduced worldwide by humans.

Feral pigs cost the agricultural industry over $100 million each year, largely via predation of lambs, competition with livestock and damage to property and crops. Industries such as wool, meat (cattle and sheep), grains, sugar and bananas are directly affected. Feral pigs also host serious diseases with the potential to devastate livestock operations. It is estimated that a year-long outbreak of foot-and-mouth disease (FMD) would reduce export revenue by more than $9 billion. Furthermore, feral pigs range close enough to domestic swine facilities to pose a significant biosecurity risk. Australia’s supply of feral pig or ‘wild boar’ meat to international markets — mainly Europe and Asia — generates around $20 million each year.

Feral pigs cause extensive damage to natural habitats by turning over vast areas of soil when rooting for food. They also wallow and foul up water sources, trample and consume native vegetation and facilitate the spread of weeds and Phytophthora. Ground-dwelling fauna like frogs and turtles are easy prey for digging pigs. According to Australia’s Environment Protection and Biodiversity Conservation Act 1999 and feral pig Threat Abatement Plan, about 40 threatened species are at risk of feral pig predation, habitat degradation, competition and disease transmission.

Some members of the community see feral pigs as a food and recreational resource, and hunting plays a role in managing this highly destructive species. But the scope of the damage caused by feral pigs to property and landscape, as well as their potential for disease transmission, far outweigh any benefits of hunting and harvesting. For example, the social consequences of a FMD outbreak in Australia would be catastrophic for individual landholders and farming communities. Harmful effects would resonate nationally, not just in regional Australia.