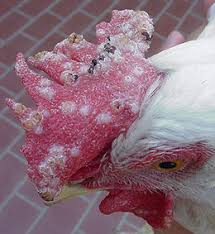 A chicken’s comb has at least one vital function: It aids in cooling the chicken. The comb is an indicator of a chicken’s health, too, and it helps initiate the mating process

Several strains of avian influenza are mild and go away without complications; but one is generally fatal. It has to be controlled quickly. Symptoms of the stronger strain include facial swelling, dehydration, respiratory distress, and blue comb and wattles. Infected birds may present red spots on their legs and combs, and bloody discharge from their nostrils. Eggs may be soft or shell-less as well

Avian influenza is highly transmittable; it can be transferred via shoes, rodents and improper disposal of dead birds and their waste. Suspected cases must be reported to the state veterinary oversight office; all exposed birds must be euthanized to prevent the spread of the illness

Fowl pox is a viral disease that can infect birds of any age. It spreads slowly through direct contact with an infected bird or via mosquitoes. The dry type of fowl pox presents nodules — which eventually turn into scabs– on wattles, comb, ears and eyes. Wet pox presents in the mouth and respiratory system, causing difficulty eating and breathing. Fowl pox takes three to five weeks to run its course. The prognosis for recovery is generally good. Complications of both types of pox include growth retardation and decreased egg laying. Vaccination is the only way to prevent the occurrence of fowl pox; seek your vet’s input; he may suggest a first administration as early as 6 to 10 weeks of age

Fowl cholera, caused by bacteria, has symptoms that include wattle swelling, a purple color to the comb and wattle, diarrhea, coughing and oral discharge. Other symptoms that may occur are loss of appetite, swollen joints, fever, lameness and sudden death. The bacteria that causes fowl cholera, Pasteurella multocida, can be brought in by rodents, swine and cats. It is treated with antibiotics, including penicillin, tetracyclin and erythromycin. But fowl cholera can recur when the use of antibiotics stops. The bacteria can stay in soil for long periods but can be controlled using disinfectants. Fowl cholera is most likely to occur in adult and senior birds; it strikes hens less often than cocks

Blackhead disease, or histomoniasis, primarily infects turkeys but has been seen in chickens. Chickens are better able to resist the worst effects of blackhead disease, but they carry the protozoa and pass them to other fowl. Histomoniasis is transmitted by the larvae of the cecal worm but can also be obtained when a fowl eats earthworms that have ingested cecal worm eggs. Histomoniasis can also be transmitted via the feces of other infected birds

Symptoms of blackhead disease include lack of appetite, weight loss, ruffled feathers and a sleepy appearance. Yellow droppings are another sign of histomoniasis infection. Histomoniasis can be fatal untreated; adding dimetridazole to drinking water or feed will stop the infection.

Birds with symptoms must be quarantined; any birds who die from the disease should be burned.

Prevent or at least limit blackhead disease by rearranging fixtures in your chickens’ living areas and disinfecting thoroughly, to discourage buildup of the disease-causing organisms.