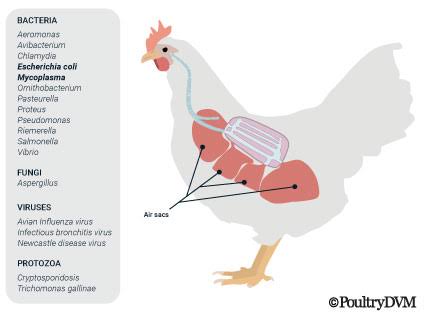 Birds provide humans with companionship and affection. Wild birds offer a source of bird watching enjoyment and a sense of tranquility from their songs. Despite the many advantages to life among birds, dangers do exist. Both wild and pet birds have been known to cause serious, even life-threatening, lung diseases in humans.

Touching, holding or petting birds rarely causes diseases according to the Centers for Disease Control and Prevention. The majority of bird-to-human diseases, known as a zoonotic disease, occur when the human inhales dropping particles or the actual dander that the bird produces. Pigeon keepers have long been known to contract a disease known as pigeon fancier’s lung. The keeper becomes sensitive over years to the pigeon proteins in the dust of the birds’ feathers. The allergic disease symptoms can manifest after one year or 20 years of exposure.

Chlamydiosis or psittacosis normally occurs in parrots. The United States government tries to control the spread of the disease into the country by quarantining all birds legally imported and treating them to prevent the disease. Unfortunately, many pet birds contract the disease after they are sold and come into contact with a feathered sufferer. The bird passes the disease on to humans when the human inhales particles from the infected droppings. The disease persists in the U.S. due largely to the illegal importation of infected birds, according to the Michigan State Government.

Wild bird droppings, especially those of pigeons, cause the spread of cryptococcosis. The disease affects not only the lungs but also brain and spinal cord of humans. Playing, picnicking and hiking in areas of infected bird droppings can cause inhalation to occur. The disease spreads to cats and dogs but cannot be passed to humans via the animals.

Read also: why you should avoid cutting corners in poultry Production

Lung diseases are usually transferred from birds to humans only when the individual is under the age of 5 or already has a compromised immune system. Infants appear to be highly susceptible. People with HIV/AIDS must take great care around birds. Individuals whose immune systems have been weakened by cancer treatments also appear to be at an elevated risk of contracting bird-related lung diseases, according to the Centers for Disease Control and Prevention.

Bird-keepers should take their birds to their local veterinarian yearly for a complete checkup. Many birds hide their illness symptoms as a survival mechanism that is ingrained from their wild genetic instincts so owners might be unaware that their pet is suffering. Owners who exhibit signs of a lung disorder should promptly seek medical help from their family practitioner. Lung diseases can quickly progress and often become fatal if left untreated.