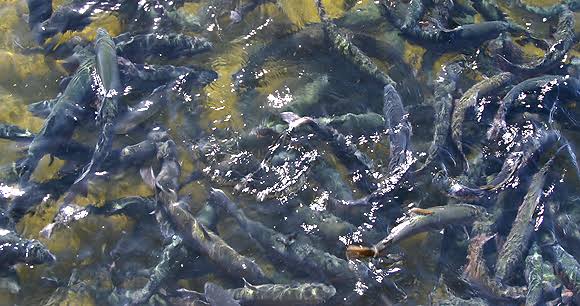 “Fish production or fish farming is a form of aquaculture in which fish are raised in enclosures to be sold as food.”

What is Fish Production?

Fish are a very high source of proteins and have great nutritional value. Fish production was initially dependent on fish capturing. However, most of the captured fish were used for industrial purposes and were hardly consumed by man. Therefore, an alternative method to increase fish production was devised that includes farming and husbandry of economically important aquatic organisms. This is known as aquaculture.

Fish production can be done in two ways:

This is the controlled cultivation of fish in water bodies. It can also be referred to as fish farming or pisciculture. Note that pisciculture is a form of aquaculture as aquaculture is the scientific rearing and management of all aquatic animals.

Fishery is further divided into:

The method incorporated here is generally pisciculture, as the yield of capture fishery is not very high.

5-6 species are reared in one water body. This selection of species is such that they have different food habits yet there is no competition for food.

With the Indian landmass being a peninsula, we have been blessed with a coastline of 7517 km. Thus, fishing is a source of livelihood for 14 million people. These 14 million people cast their fishing nets in marine fisheries, i.e. in marine waters- the sea and the ocean.

The use of echo-sounders and satellites for the location of large fish to increases the yield.

Read also: How to Sterilize a fish tank and equipment

Culture fishery is also known as fish farming. Let us have a detailed look at the process of fish production by fish farming, and its advantages.

About half the fish consumed today is raised globally through fish farming. Some of the common fish species that are farmed include tuna, salmon, halibut, cod, and trout. The aquafarms can be in the form of mesh cages submerged in water or concrete enclosures on land. However, the fish farms can damage the ecosystem by introducing diseases, pollutants and invasive species.

This method implies moderate levels of economic and labour inputs. The production can be increased by supplementary feeding or addition of fertilizers. Thus, the production of fish is higher.

In this method, the fish are stocked with as many fish as possible. The fish are fed with supplementary feed.