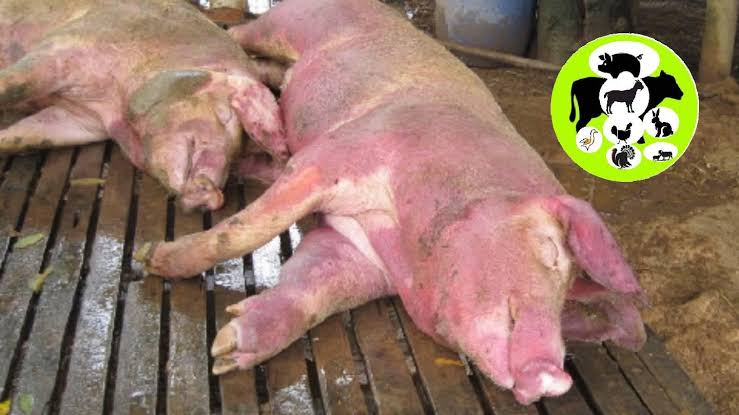 Occurrence: Absent, or eradicated from many countries and notifiable.

Classical swine fever is caused by an RNA pestivirus. It multiplies in cell cultures prepared from pig tissues (including leucocyte culture). Swine fever virus occurs as a single major antigenic type. It enters the body through the upper digestive or respiratory tract and multiplies in the tonsils and other local lymph nodes. Spread in the blood (viraemia) follows to infect the endothelial (lining) cells of the blood vessels and lymphatics. A secondary viraemia follows 5-6 days after infection as the clinical signs develop. The virus attacks:

The blood vessels become blocked by proliferation of the vascular endothelium. Virus spreads to the salivary gland and bladder and is shed. Virus may cross the placenta and lead to abortion, mummification or the birth of pigs with persistent viraemia, congenital tremor and no antibody.

Transmission is mainly by contact with infected pigs, their respiratory secretions, faeces or urine, all of which may contain virus. The virus is acid resistant (pH 5) and relatively heat stable. One hour at 66˚C is required for inactivation of the virus in blood, but it survives in frozen pork for 1,500 days and in chilled, pickled, salted or smoked meat for 3-6 months. The virus survives for 2 days in faeces or infected pens at 37˚C but may survive for 4 weeks in winter. These properties mean that infection can take place after eating swill (garbage) containing improperly-cooked pigmeat, following transport in inadequately-cleaned and disinfected vehicles, following re-stocking of infected premises and on vehicles, implements and clothing exposed on infected farms. Recent studies suggest that aerosol transmission is possible.

The incubation period is 5-10 days (range 2-30 days) after which young pigs may be found dead. Acutely-affected animals are dull, lethargic, inappetent and fevered (40.5-41.5˚C, 105-107˚F). These pigs are followed by conjunctivitis and constipation then by diarrhoea with occasional vomiting. Pigs huddle in piles in the bedding, walk reluctantly with a swaying movement of the hindquarters and seek the support of walls or posts. Reddening and blotching of the skin and dyspnoea (difficulty in breathing) occur. Convulsions occur early in the disease and are followed by circling, incoordination and ataxia. Death normally occurs within 4-8 days of infection in hyperacute cases, 9-19 days in acute cases and between 30 and 95 days in chronic disease. Emaciation, with blotching and necrosis of the ears may occur; Sows may abort, foetal resorption may occur, or weak and trembling piglets may be born (congenital tremor type A1 myoclonia congenita). Few clinical signs may be observed. In some infected herd individual affected litter may be the only clinical signs of infection. Infection with low virulence virus often resembles chronic disease with transient fever and inappetence and a reduction in blood white cells (leucopaenia). Abortion and the birth of mummified, stillborn or trembling piglets may occur.

High fever in large numbers of dull, lethargic, inappetent pigs with conjunctivitis, walking reluctantly with a swaying movement of the hindquarters and seeking the support of walls or posts with some deaths should lead to suspicion of swine fever. Swill-fed or recently purchased pigs are at particular risk. Trembling piglets could have congenital infection. Leucopaenia is present in early cases. Herds may be screened for antibody using a specific ELISA based on virus glycoprotein E2.

Post-mortem findings of reddened skin, widespread haemorrhages, haemorrhagic (‘strawberry’) lymph nodes, petechiae (blood spots) on the kidney (80% of cases), skin (50%) bladder and lung (30%) support the diagnosis. Infarction (thrombosis) occurs in the spleen (20%), and ‘button ulcers’ of the colon occur late in the disease. A marked non-suppurative encephalitis is present in most cases and cerebellar hypoplasia is present in trembling piglets. Identification of the virus, its nucleic acid or antibody to it confirms the diagnosis. Lymph node taken from affected pigs is examined by fluorescence microscopy, immunoperoxidase and by modified Polymerase Chain Reaction (PCR) for evidence of virus. Virus can be isolated from lymph nodes and blood and confirmed as swine fever virus using monoclonal antibody panels to distinguish it from other pestiviruses.

Read also: How to do organic pig Farming: tips and tricks

There is no treatment. Material should be taken for statutory diagnostic purposes and all affected animals should be killed. Swine fever is controlled by exclusion or eradication in most countries. In the EU a slaughter policy operates in which suspicion of swine fever is followed by notification of the state veterinarian and immediate isolation of the farm. All pigs in contract with confirmed cases are slaughtered and buried or burned. Farms are disinfected and left depopulated for a period. Markets in the affected area are closed until danger of further infection has passed and pig movements are strictly controlled. Movement is banned in the 3km protection zone around an outbreak and in the 10 km surveillance zone. Tracing of contacts is carried out, and herds in the protection and surveillance zones are screened for disease. Large numbers of progeny have had to be slaughtered to maintain animal welfare on the movement-restricted units. Entry of the disease is prevented by import of meat from countries free from disease and heat treating food waste containing meat before feeding to pigs or by banning swill feeding completely. In countries in which the disease is enzootic, live attenuated virus vaccines can be given. Marker vaccines are under development for use in wild boar which pose a threat to domestic pigs in countries where they are infected.

Classical Swine Fever does not affect humans, but it is so infectious for pigs and causes such high mortality that it is Notifiable worldwide to governments, regions such as the EU and to OIE which publishes the information. Trade in pigs or pig products from affected areas or countries is suspended until the disease is eradicated.