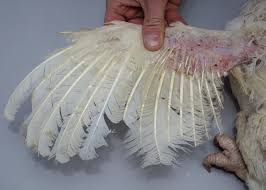 Importance of the Feather

There are more than 8,000 feathers covering the average broiler chicken. Those feathers make up about three to six percent of the average live weight of the bird. They are an important part of the integumentary system, with feather tracts covering over 75 percent of the bird’s skin. Feathers play a key role in regulating body temperature and protecting the bird from external injury or infection. The feather is made up of an elongated central shaft (rachis) with two vanes branching off each side. Each vane has barbs that branch off of the main rachis. Each of those barbs has barbules that are held together by small hooks, which are what give the feather its shape. These hooks are what you can feel when you run your fingers backward along the shaft of the feather.

The feather is a structure that needs to be light and flexible enough to give birds control over flight, yet strong and tough enough to withstand the forces associated with flight. A unique protein called “keratin” accomplishes this balance. There is an alpha-type keratin that makes up the hair, nails, or horns of mammals, and a betatype keratin that is a harder, more rigid form found in the scales and claws of reptiles and the beaks and feathers of birds. At a basic level, the feather is actually a highly specialized scale, and its evolution was one of the keys to the success of the avian dinosaurs over 65 million years ago.

A baby chick is hatched with a set of fluffy down feathers, and as it ages, its feathers develop in stages: loss of down feathers (between hatch and about 3 weeks), juvenile plumage (between 5 to 12 weeks), and adult plumage (20 to 30 weeks). The process of feathering is continuous, however, with each stage blending into the next and new feathers growing throughout adulthood.

There are two basic phases of feather development: the initial growth of coverage during the rearing phase and the maintenance of that feather coverage throughout production. If extreme feather loss occurs at 30 weeks or older, there is no quick or easy fix. Ideally the birds already have good feathering, and must simply help maintain the coverage that they have.

Broiler breeders are a biological paradox. They need to maintain the genetic potential of their hearty-eating, fast-growing broiler offspring, but they are reared for fertile egg production rather than meat production. For this reason, breeder operations must use some form of a controlled feeding program, both to help develop an appropriate appetite during the pullet phase and to prevent obesity and reduced fertility later in production.

If a proper balance is not struck, behavioral issues (such as aggression and feather pecking) may arise due to the strong feeding motivation common in high-yield broiler breeds. An increased feed competition results in poor flock uniformity with respect to body weight, and that means that the whole flock will no longer respond the same to any feed or management decisions.

The red circles represent the sulfur-containing amino acids that link together to strengthen the keratin fibers.

If you do not see good feathering, you can attribute sparse coverage to one of two essential causes: the birds cannot grow feathers (nutrition), or the birds have had them pulled, pecked, or broken off (management). In cases of management-related issues, feathers develop properly, but are not maintained due to behaviors like feather licking and feather pecking.

Read also: Poultry Vaccines for use in organic farm

Aggressive feather pecking is a behavioral issue related to the bird’s instinct to use its beak to investigate surroundings. These animals have evolved to form hierarchical social groups, adhere to what other birds are doing, and stay alert and active to changes in their environment. Researchers have reported that chickens perform what’s called “foraging and food-search behaviors” (which essentially entails pecking things with its beak) up to 14,000 times a day. If a bird is experiencing a stronger than average feeding motivation—because it’s on a controlled feeding program, for example—this natural pecking behavior can be expressed in extreme and unhealthy ways.

Finding a Nutrition Impact Nutrition influences feather development and integrity. Feathers, like muscles and eggs, are made of protein. As would be expected, higher protein diets lead to more feathers in the litter (because of a greater rate of feather regeneration), whereas diets containing less than 16 percent protein show the opposite. But, as is usually the case with nutrition, it’s difficult to pinpoint a single diet change that will remedy a feathering issue once it has occurred. Nevertheless, there are preventative measures that ensure that broiler breeders have the necessary nutritional building blocks for a good set of feathers. Whether they keep them or not will depend on behavioral management. Nutrition is best suited to help the birds maintain what they have.

The most common nutrition-related cause of poor feather development is a deficiency in the critical amino acids that are needed to make the keratin in the feathers. Sulfur-containing amino acids (cysteine and methionine) are the major constituent of feathers. Cysteine can make up about 25 percent of the amino acid residues in keratin. This is because, functionally, cysteine is critical in constructing the very strong disulfide bonds that link the keratin fibers together, giving them their strength. The other sulfur-containing amino acid is methionine. When cysteine levels are deficient, the body can make its own from methionine. This can become a problem because methionine is the first limiting amino acid (the first one the chicken is likely to “run out of”) in corn-soy based diets. We don’t want valuable methionine to be used simply to meet the body’s needs for cysteine, nor do we want sulfurcontaining amino acid deficient birds trying to satisfy their requirement by eating sulfur-rich feathers— their own or their neighbor’s.

The preen gland is a gland at the base of the tail that produces an oily substance that is largely used to help protect and waterproof the feathers. The secretions of the gland can have a slightly “salty” flavor, and may be sought out by birds when the diet does not have an adequate balance of electrolyte minerals such as sodium.

Keratin synthesis requires certain key vitamin and mineral cofactors. These include zinc, copper, and most of the B-complex vitamins. For example, folic acid (vitamin B9) is required for the conversion of methionine to the amino acid cysteine, which is key in feather production. Without these essential components in the diet, the chemical reactions that metabolize protein and construct feathers cannot occur.

When the diet is too low in crude fiber (non-digestible carbohydrates), hungry birds may begin seeking out “roughage” from their neighbors’ feathers.

What about issues not related to the feed formulation itself? In a commercial feed mill, all feeds are typically mixed in a single mixer and then sent to either pre-pelleting bins or directly to the pellet mill. However, many medications (such as the anticoccidials) that are important for the health and productivity of broilers can be detrimental to egg-laying birds. It is possible for medicated feed remaining in the mixer, a pre-pelleting bin, the augers in between, or even in the pellet diet itself to contaminate following batches. In a survey done by Kennedy (1998), almost one-quarter of samples of an anticoccidial-free “withdrawal” diet contained the drug in excess of 5 percent of its therapeutic dose. The highest sample in that group contained 40 percent of the therapeutic dose.

Anticoccidials can affect the integrity of the skin, cause a characteristic paralysis (where the legs extend backward), reduce hatchability through a weakening of yolk membranes, worsen the effects of heat stress, and turn brown egg shells white. Ionophores have also been reported to delay the maturation of growing feathers.

In cases where a feed mill mixes both broiler and broiler breeder diets, it is important to avoid exposure of the breeders to anticoccidials. This can be done by running medicated and non-medicated feeds through dedicated systems or running a “flush” feed between batches that will be discarded.

Read also: Importance of records maintenance on the poultry farm

When it comes to broiler breeder feathering issues, nutritional factors such as protein and amino acid content receives the most attention because that is what feathers are made of. While abnormal feathering can certainly be an aid in diagnosing some of the nutritional deficiencies, it is typically a nonspecific process.

With respect to nutrition, it is important to remember that early nutrition is key. Producers should use good nutrition to maximize feathering through the early phases. Problems with feather coverage that arise during the later periods (30 to 60 weeks) are typically caused by damage that was caused earlier on. It is often too late to make nutritional fixes during this most financially important period.