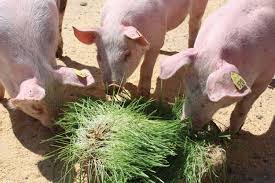 Pork producers have long recognized the value of forages in the swine enterprise. Prior to 1950, pasture was considered a vital component in swine feeding programs. But after synthetic vitamins became universally available during the early 50s, the need for forage crops in swine production was diminished. But even today, pastures and forages may contribute a practical and economical part of feeding hogs.

Can hogs utilize forage? Research demonstrates that pigs make better use of forage crops than previously assumed. Studies have also shown that the digestibility of fiber improves as the pig matures. They absorb more nutrients from forages after an adaptation period of at least two months with nearly all of the fiber digestion taking place in the large intestine. The importance of using forage when it is at an early stage of maturity is more critical with swine than with ruminants.

Why use forage? The primary reason a pork producer would consider using forage in his feeding program is to save on grain or protein costs. Before making forage a major part of the diet, first consider the potential savings that may be realized. Since most forages contain more protein than do the grains, both grains and protein supplements may be reduced when using forages. But it is also important to remember that the digestibility of protein in forages is lower than that of soybean meal or other protein supplements. If the diet contains more than 25% forages, the protein content in the complete feed should be slightly higher than that of a typical grain-soybean meal diet.

Forage can simplify feeding and management of the breeding herd. For example, sows on good quality pasture can be fed less often and with a smaller amount of concentrate. With the proper amounts of forage in a complete feed, sows can be self-fed during gestation without adversely affecting weight gain or reproductive performance (although some feed wastage may occur). Sows appear more content when the diet contains a significant amount of forage, compared to limit-fed sows that receive only 4-5 lb. of concentrate each day.

Forage may also be used to provide a source of fiber. Nutritionists and producers have both recognized that fiber prevents constipation during late gestation and early lactation. Diets for newly arrived feeder pigs and starter diets containing increased fiber levels have been shown to reduce diarrhea problems. While it’s not a direct benefit of the forage, pigs and sows on pasture may have fewer health problems because of improved sanitation and air quality.

Potential drawbacks to forage. Fresh forages are low in dry matter, which means the pig must consume more material to get the same amount of nutrients found in grain or in complete feed. For this reason, pastures and/or high levels of forage in the diet are less practical for pigs weighing less than 40lb. and for sows in lactation.

Another drawback to using forages, especially pastures, is that they might not be available during the entire year. This means that the feeding program may have to be modified from one season to the next.

Hogs should be rotated off pastures periodically to prevent heavy bacterial and parasite contamination.

Feed value from pastures is often overestimated by producers since forages may be heavily damaged by hogs. Both the pasture and the forage crop must be well-managed to provide optimum feed savings. Producers may find this difficult especially during the spring and fall months when damage from hogs rooting the soil reaches a peak.

Finally, hogs housed in a pasture setting have a higher energy requirement since hogs outside get more exercise than those housed in pens or enclosed facilities. Sows will require more feed during gestation, and market hogs may gain slower and less efficiently.