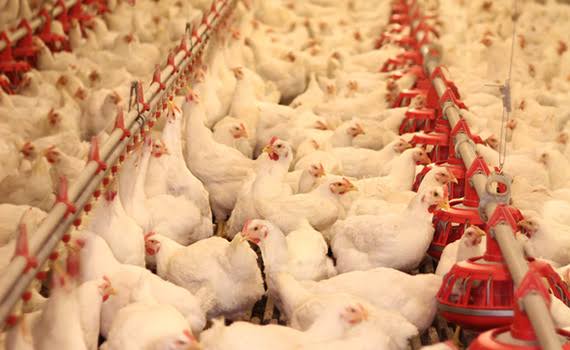 The ideal density at which to place broilers during grow-out is an ongoing debate. There is no definitive answer to this question. It is natural to assume that birds will perform better when given more space. However, it’s not more space but the improved environment that the added space may provide that is important.

The modern broiler house enables producers to have great control over the house environment. Birds can be placed at higher densities as long as the correct environment (temperature, ventilation, humidity) is provided. Factors to consider when determining stocking density include but are not limited to bird size, feeder space, drinker space, house dimensions, bird welfare, nutrition, breed, performance and economic return.

Read also: Signs and symptoms of coccidiosis in chickens

The ultimate goal is to maximize pounds of chicken produced per square foot while preventing production losses due to overcrowding. In many cases, producers have to settle for slightly reduced performance to achieve a satisfactory economic return. Another concern with increased stocking density is broiler welfare. Animal activist groups request that broilers be given more space during grow-out and cite behavioral and physiological stress as the reason.

In short, once a company has determined how many pounds per square foot are needed to optimize growth, development, feed conversion, livability, and economic return, they would decrease the number of birds per house as the target weight increases. Regardless of which method is used to report density, the same factors and issues are present.

The modern broiler does not appear to deal with stress in the same manner as those grown in the past. As a result, stocking density studies usually show that modern broilers perform better when given more space. However, studies are not always conclusive due to the numerous factors mentioned previously. Unfortunately, the broiler farmer cannot afford densities of 1 or 2 square feet per bird. Houses would not cash flow, growers would not achieve a satisfactory return, and birds would not be available to process.

Studies on stocking densities in broiler production have produced variable conclusions. Some studies show large benefits in reducing stocking density, while others show little or no differences. Bilgili and Hess (1995) conducted a study examining densities of 0.8, 0.9 or 1.0 square foot per bird. Body weight, feed conversion, mortality, carcass scratches and breast meat yield were significantly improved when birds were given more space.

Means within a column with different superscripts are significantly different (P<0.05). A study by Feddes et al. (2002) demonstrated that when bird density was reduced live body and carcass weights were decreased. However, bird uniformity was better at high densities. In that study, stocking density had no effect on mortality, breast meat yield, carcass grade, incidence of scratches, or carcass quality. It was concluded that high yield per unit area and good carcass quality could be achieved at the increased stocking density when adequate ventilation rates were provided.

Read also: Dust bath for chicken: an all important ritual for chicken

The impact that proper house environment has on broiler production at higher densities cannot be over emphasized. A recent study conducted by Dawkins et al. (2004) in the United Kingdom examined the effect of stocking densities on bird welfare in commercial facilities from 10 different companies. Stocking densities of 6.1, 7.0, 7.8, 8.6, 9.4 pounds per square ft (30, 34, 38, 42, and 46 kg per square meter) were compared.

In addition to recording environmental conditions in the broiler house (temperature, relative humidity, ammonia, light intensity, and litter moisture), bird welfare was monitored through mortality, corticosteroid levels (a stress hormone), behavior and health, with an emphasis on leg strength/structure and walking ability. At higher stocking densities the birds grew slower, were jostled more and had reduced walking ability. While stocking density significantly affected three of the measured variables, environmental management affected 17 of the 19 variables measured. It was concluded that while stocking density does affect broiler welfare, the management of the environment in the broiler houses were more important.

While stocking density certainly influences broiler performance and welfare, research indicates that housing environment is extremely important. Two of the studies discussed above demonstrate that it is possible to place broilers at higher densities, but that when this is done, broiler environmental management is crucial to optimizing broiler performance and welfare.