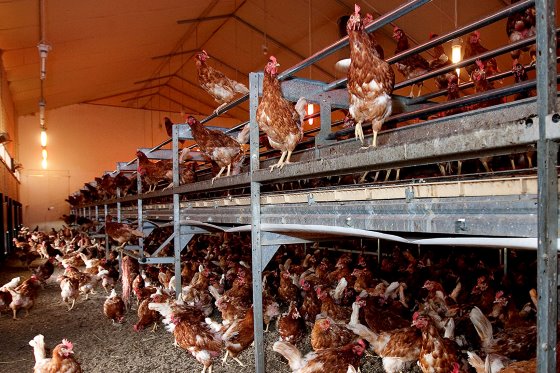 Cages have been the dominant egg production system for decades. However, concerns about bird welfare are driving many egg producers, retailers and food service companies to ban cage eggs from their supply chains. The European Commission (EC) has also recently committed to prohibiting cage use and should present a legislative proposal to address this issue by 2023.

Responding to the ‘End the Cage Age’ petition, led by 170 NGOs across Europe and signed by 1.4 million citizens, on 10 June 2021 the European Parliament voted on a ban on the use of cages in animal farming. Although the European Union (EU) had already banned the use of conventional cages for layer hens in 2012, the campaigners insisted that this was not enough. Shortly after, on 30 June 2021, the European Commission announced that a legislative proposal will be presented by the end of 2023 to phase out, and finally ban, the use of cages for several farm animals. Far from being spontaneous decisions, these recent announcements come as part of a long sequence of events leading towards cage-free egg production. Even without a legislative ban, numerous large egg producers, retailers, food service companies and hotel chains are already taking action against cage eggs. With this in mind, let’s look at some of the most relevant trends and challenges surrounding cage-free systems.

Chickens have traditionally been kept in floor systems since their domestication over 8,000 years ago. Backyard chickens, which are still common around the world, are generally housed on the floor and are provided with variable amounts of space. Conventional cages, developed in the 1930s, eventually became the standard housing system as the industrialisation of egg production advanced. These cages brought essential benefits to egg producers, such as more efficient use of the available space, the possibility of a fully automated process, easier management, superior hygiene, lower incidence of infectious diseases, lower feed consumption and lower production costs.

Although successful, cage systems also received early disapproval from some. By the 1960s, animal welfare was gaining in importance in Europe and the use of cages started to be criticised for restricting bird movement and the expression of certain behavioural patterns of laying hens. Furnished cages – also known as enriched, colony or modified cages – were first developed in the 1980s. These represented an attempt to combine the best of two worlds: the advantages of conventional cages in terms of hygiene and production efficiency, together with some of the benefits of cage-free systems. Besides providing more space per hen than their traditional counterpart, furnished cages are typically equipped with a perch, nest, scratching area and nail shortener. The exact provision of each of these elements may vary from one country or region to another.

It is widely recognised that furnished cages increase hens’ behavioural expression compared to conventional cages, besides improving the birds’ physical condition. Nevertheless, the precise degree to which such behaviours can be expressed in furnished cages has also been questioned, since locomotion, ground-scratching, wing-flapping and flying are inherently limited or prevented in all types of caged environments.

Despite EU-wide legislation that authorises furnished cages, several member states have banned any type of cage for egg production. At the same time, others have also announced plans to ban cages in their territories. Relevant industry stakeholders are also driving egg production into a ‘post-cage era’, not only in the EU but also in the USA and several other countries. In its most recent Egg Track Report, issued in 2020, Compassion in World Farming revealed that dozens of major egg producers, retailers, food service companies and hotel chains, including corporations with a worldwide presence, have committed to banning cage eggs from their supply chains. Some of these companies have already fully transitioned to cage-free eggs, while most others plan to do so by 2025.

Not surprisingly, in those regions the share of eggs produced in cages has sharply decreased in recent years. While in 2008 over two thirds of hens in the EU were housed in cages (68%), by 2020 this figure had dropped to less than half of EU hens (48%). Similarly, while cage-free flocks yielded only 5% of US eggs in 2009, they now account for 29% of all eggs produced and it is estimated that their share will increase to about two thirds of the market by 2026.

Apart from inspiring amendments to layer hen welfare regulations on other continents, Council Directive 1999/74/EC transformed the landscape of egg production in the EU. In brief, this directive imposed relevant changes on egg producers at two milestones: from 2003, at least 550 cm2 of cage space per hen had to be provided (the former requirement was 450 cm2 per hen), while conventional cages were finally banned in 2012. These changes mean that all layers must now be housed either in non-cage systems (barn/aviary, free-range or organic) or furnished cages (minimum space requirement of 750 cm2 per hen).

Although they allow hens to express their entire behavioural repertoire, cage-free systems present specific challenges for egg producers. On average, hen mortality rate is greater in cage-free systems, especially in free-range, compared to furnished cages. A greater prevalence of cannibalism, various bacterial infections and internal parasites, plus the occasional occurrence of smothering, explain that difference. Moreover, free-range chickens are at risk of predation and can become infected with diseases, such as avian flu and Newcastle disease, through contact with wild birds. Wet litter and high ammonia content can lead to footpad dermatitis and bumblefoot, a painful footpad infection.

The prevalence of keel bone fractures, a vital welfare concern in layer hens, is higher in non-cage systems compared to ­cages. Although well-managed cage-free flocks can achieve good performance, their average productivity can be lower in comparison to cage production. Added to which some eggs will be laid on the floor and these have a higher level of bacterial contamination of the eggshell. Another negative consequence of floor eggs is the possible triggering of broodiness which interrupts egg production in the affected hens. Non-cage systems also provide hens with more space, thereby increasing bird movement and energy expenditure. Therefore, feed intake and the feed conversion ratio (FCR) are typically higher in non-cage systems compared to cages. All in all, there are many challenges to be overcome when switching to cage-free production.