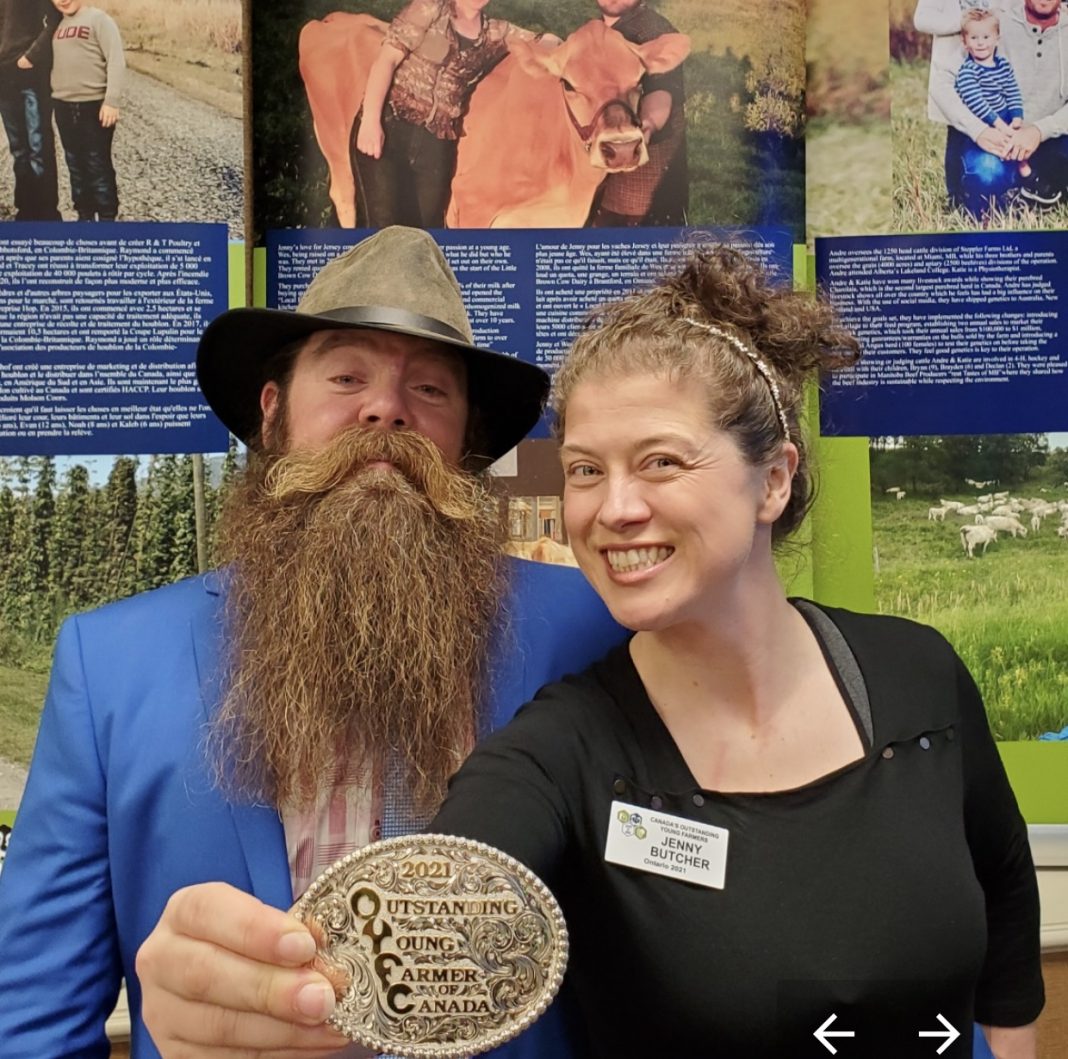 “Agriculture is exactly where we, women, belong!”
Jenny Butcher could have chosen to stay on her family’s dairy operation and do things the usual way. Instead, she and her husband Wes decided to go for a fresh start, start their own farm and do it from a different approach entirely.
If buying local (food) is becoming increasingly popular among the broader population now, especially following the pandemic, Jenny and Wes knew the importance of going local years ago and built their entire operation around it. Today, thirteen years after leaving the family farm, they provide artisan cheese, milk and beef as well as homemade meals made in the onsite commercial kitchen, all directly on the farm. It has earned the couple the title of Ontario’s 2021 Outstanding Young Farmers. Here’s Jenny’s story.

Little Brown Cow Dairy Farm & Store
Jenny Butcher (38) comes from an agricultural background and studied agriculture. Nevertheless, she and her husband Wes started their farm and on-farm store from scratch. “I have a rich background in agriculture”, Jenny says, “growing up on a dairy farm and completing my Bachelors of Commerce in Agriculture.”

“One of the things that interests me most about agriculture is the unchartered water that exists in de-commoditizing farms. There are thousands of things that can be done in the daily life of your farm to set yours apart. Those things make up a story that people are ready and willing to hear.”

Jenny and Wes run the Little Brown Cow Dairy Farm & Store in Ontario, Canada, a dairy and beef farm where the milk is pasteurized and processed into cheese products on site before being sold in the farm store. “My husband Wes and I own and manage a Vertically Integrated Operation”, Jenny explains. “We have a dairy and a beef farm where we milk 60 Jersey cows and house a herd of 200 in total. The milk is processed in our on-farm creamery, and the milk, the on-farm produced cheese and beef are the featured products in our on-farm grocery store.”

Farming in Ontario
Jenny’s farm is located in Brantfort, one hour’s drive from Toronto and Buffalo in the States. While accessibility and the relative proximity to more densely populated areas was important for her and her husband, it made the search for suitable land a bit more complicated. However, the couple were lucky, as Jenny explains: “when we started farming in 2008, we were intensely focused on finding a farm that was close to an urban centre. We were starting without family capital so we felt that the only way to make it farming was to add value to a primary product and sell directly”, she says.

“It was an inconvenient desire, though, since the most expensive farmland is surrounded by cities. Luckily, we won the lottery with the farm we eventually purchased! It’s within an hour’s drive of approximately 8 million people, and we were able to afford it at the time because it had a very small land base with only 40 acres so it wasn’t taken seriously by fellow farmers.”

While ideally situated relatively nearby cities, there’s the particular climate conditions to take into account on the farm. “Here in Brantford, Ontario the climate is extreme, ranging from -30 C to +35 C. That adds a lot of cost to buildings and things to consider when managing animals, properties and people.”

Like for most farmers, Jenny’s days start very early and are rarely identical. “The temptation in a business like ours is to put all the time and money towards what we perceive to be the money maker on the farm: in our case, that’s the store. But we know the farm is the lifeblood and core of our business. We start everyday, nearly 365 days a year, on the farm at 4:30 am and aim to finish morning chores and any management by 8 am. I spend the rest of the day managing people, greeting customers and connecting with suppliers to ensure our store is well run and well stocked”, Jenny says.

she knows what it’s like to be treated differently for being a woman on the farm – the classic“is there a man around” we hear so often being one of the manifestations of this – Jenny decided to give it a twist of her own and accentuate her “female” touch. An unusual approach maybe, but one that works and it shows in the store! “I have acquired a myriad of stories through the years of people not accepting me as a serious decision maker on the farm. “Is your Dad around”, is a question that was asked often in the early years”, she explains, “but honestly, I probably have more stories of getting extra attention because I often provide a different point of view than an average farmer. Driving head first into the difference instead of minimizing it has been helpful.”

“As an example, we name our cows quirky, fun and memorable names and do so overtly on their nametags. I know that your average farmer doesn’t do this. But when you can justify the practice and bring it back to its relevance to production, that farcical practice can be respected as simply different. A name like “Fine Time Lucille” (Lucille, for short) has a much better memory recall than “Cow number 65” for the folks working on the farm, allowing them to manage each cow with more individualistic care. The name has the same affect on our predominantly female food purchasing customer base and allows them to invest emotionally in our herd.”

Pursuit of the infinite game
For all her experience in farming in general, and dairy in particular, some things will always be difficult about life on the farm. The life of a farmer is one of hard work, long days and when you work with animals, death is a part of it all. All those things can weigh heavily on the mind.

“It’s that death. The death of that one cow that you know, with the gift of hindsight, you could have done more to prevent. And when things get tough on a dairy farm, they get really tough. The responsibility and daily grind is relentless. Once you start feeling like you’re doing an inferior job, it becomes less exciting to do the job and a vicious cycle starts. I suppose that cycle can happen with any job, but I can’t imagine a situation so simultaneously persistently demanding of your time and unforgiving of your faltering.”

Luckily, farming also comes with a lot of beautiful moments where the passion for the job is rewarded, be it in the simple small moments of everyday life on the farm or getting recognition for your hard work from the outside world. “We’ve had some pretty neat moments like a win with our cow at the Royal Agricultural Winter Fair (Toronto, red.) and winning the Outstanding Young Farmer Award for Ontario. Truthfully, it is the pursuit of the infinite game that motivates me. The idea that applying a love for my vocation in every little action in my day makes a better cow, a better product and ultimately, a better community… I think that’s pretty cool.”

Women belong in agriculture
When we ask Jenny if she has any advice to share with young women who want to build a career in agriculture, this is what she has to say: “agriculture is about making food. Nourishing people has been a traditional responsibility of women in society. So, it is exactly where we belong! But in a traditional sense, perhaps women do better the closer we get to actually nourishing people and the further away we get from production. This is nothing to apologize for. Exploit it! It just so happens that the further we get along the supply chain, the more profit is involved too.”

“We get a lot of work done in a day and it’s work that I feel privileged to do. But don’t let articles about other people’s lives fool you! We have a staffed commercial kitchen where our meals come from, my house is an utter disaster unless you give me a week’s notice you’re coming over and even then it might still be. And, we don’t have kids! (laughs)”

About Little Brown Dairy
Jenny Butcher and her husband Wes Kuntz left the family dairy operation to start their own farm. The goal: a unique and innovative farm experience. The story began with acquiring the license to process the milk from their twenty jersey cows into cheese. Today, Jenny and Wes are running an on farm one stop shop for all food items produced either on the farm or within 100km of Brantford.

The couple won the title of Ontario’s 2021 Outstanding Young Farmers.